State of Human Rights in Iran

Update Required To play the media you will need to either update your browser to a recent version or update your Flash plugin.
By VOA
Apr 30, 2018


At the recent release of the State Department's annual report on human rights practices, John Sullivan, who was serving as U.S. Acting Secretary of State, pointed to Iran as one of the countries with an “egregious” record:

"The Iranian people continue to suffer at the hands of their leaders. The right of peaceful assembly and freedoms of association and expression are the legitimate expectation of all individuals worldwide. Unfortunately for the Iranian people, these human rights are under attack almost daily.”

The State Department report noted the repression of nationwide protests in Iran that began on December 28, 2017 and the severe restrictions on religious freedom in the country, including the continued repression of the Baha'i community. 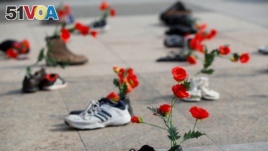 Shoes with flowers are a demonstration against the speech of Seyyed Ali Reza Avai, Minister of Justice of Iran, at the Human Rights Council in Geneva, Switzerland. (File)

Government harassment and prosecution of publishers, editors and journalists were reported as well, in addition to restriction of access to the internet.

In his preface to the report, Mr. Sullivan warned that states like Iran that violate their citizens' human rights and restrict their fundamental freedoms “are forces of instability.”

“Our foreign policy,” he declared, “promotes freedom as a matter of principle and interest. . .The United States will continue to support those around the world struggling for human dignity and liberty.”