In Bangladesh, Striving for Prosperity to Secure Peace

Update Required To play the media you will need to either update your browser to a recent version or update your Flash plugin.
By VOA
Sep 3, 2016


Since Bangladesh became independent in 1971, it has enjoyed a broad and robust bilateral relationship with the United States. The United States has provided billions of dollars of assistance that has helped Bangladesh achieve impressive social outcomes and build its institutions.

“The United States is very proud to have been a partner in Bangladesh's growth, and we welcome this nation's participation in all three of President Obama's signature development initiatives: health care, food security, and the all-encompassing issue of climate change,” said Secretary of State John Kerry during his recent visit there.

Over the years, the people and government of Bangladesh have worked hard to forge a path to prosperity. Today, thanks in part to its $28 billion garment industry, Bangladesh has enjoyed two decades of economic growth around 6 percent annually, one of the more impressive track records in the world. 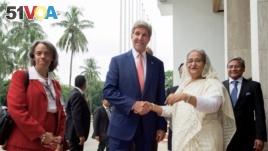 But despite its successes, Bangladesh has seen a number of disturbing terrorist attacks. Two major attacks in early July killed dozens of people, and a spate of smaller attacks over the past several years, often directed at members of religious minorities, foreigners, bloggers, and security officials is obviously intended to push people apart, to create internal strife, said Secretary Kerry.

“These heinous acts of violence, and too many others worldwide, are a stark, painful reminder that those who aid terrorist groups or perpetrate these acts have no respect for national boundaries, no concern for the rights of others, no regard for the rule of law, and they do not embody the values of the people of Bangladesh or the United States, or the majority of people across the globe. And it is important for us to make that statement.”

“When a country faces those kinds of threats, it's even more important to uphold the values of democracy. Because if you don't, you will more quickly feed the frenzy that can come with opposition and panic and hysteria,” said Secretary Kerry. “Remember this: no country is immune from terrorism. It's easy to terrorize. Government and law enforcement have to be correct 24 hours a day, 7 days a week, 365 days a year,” he said

“The fact is we have to stand together, and the United States is standing with Bangladesh in this fight.”