Update Required To play the media you will need to either update your browser to a recent version or update your Flash plugin.
By VOA
May 4, 2018


For decades the Iranian regime claimed it had no interest in and no program for developing nuclear weapons. On April 30 Israel's Prime Minister Benjamin Netanyahu publicly presented a huge file of information explicitly outlining such a program, retrieved from Iran in an Israeli intelligence operation.

Secretary of State Mike Pompeo said that the United States has assessed that the documents presented by Israel “are authentic,” and “show beyond any doubt that the Iranian regime was not telling the truth.”

Israel provided the United States with the material to review. Secretary Pompeo said the work of U.S. nonproliferation and intelligence officials who are analyzing the material will continue for many months. 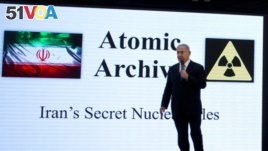 Israel's public presentation of information from Iran's nuclear weapons archive came less than two weeks before the May 12 deadline President Trump had fixed for announcing whether the United States would stay or withdraw from the Iran nuclear deal, known as the JCPOA.

Secretary Pompeo noted that Iran had many opportunities over the years to turn over its files to the International Atomic Energy Agency and admit its past nuclear weapons work. The regime also lied about its previous weapons program to the six nations who negotiated the Iran nuclear deal.

“We are therefore assessing what the discovery of Iran's secret nuclear files means for the future of the JCPOA,” Secretary Pompeo said.

Secretary of State Pompeo said that as the deadline to fix the nuclear deal approaches, he “will be consulting with our European allies and other nations on the best way forward, in light of what we now know about Iran's past pursuit of nuclear weapons and its systematic deception of the world.”