No Anniversary Celebration in South Sudan

Update Required To play the media you will need to either update your browser to a recent version or update your Flash plugin.
By VOA
Jul 16, 2017


July 11th marked the 6th anniversary of South Sudan's independence. But South Sudan and its people are suffering, the treasury is empty, and so President Salva Kiir cancelled the celebration.

Although a number of issues have complicated the situation, South Sudan's problems are largely man-made. Much of it can be blamed on South Sudan's leaders, who are unwilling to set aside personal differences and political ambitions for the good of the country. 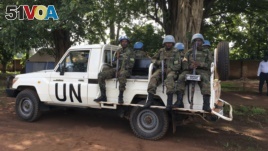 United Nations Peacekeepers drive through Yei, South Sudan, July 13, 2017. The United Nations peacekeeping mission's chief says Yei has "gone through a nightmare." Since fighting spread to the city a year ago, 70 percent of the population has fled.

In one way or another, South Sudan has been the scene of fighting for over half a century. The Comprehensive Peace Agreement of 2005 ended the Second Civil War that pitted south the Sudanese rebels against the government in Khartoum. The referendum for independence six years later led to the birth of South Sudan, ushering in an era of hope and optimism for the war-weary population.

But peace in the new country lasted less than 18 months. In December 2013, a power struggle between President Salva Kiir and Vice President Riek Machar erupted into civil war, as the country split along ethnic lines. A 2015 peace agreement and a transitional government formed in early 2016 failed to end the violence.

The fighting that continues today has led to a collapsing economy, food insecurity, hunger, malnutrition, and imposed unimaginable violence on South Sudanese. Today, some six million people ― more than half the country's population ― live with extreme food insecurity. Four million have been displaced, the majority of them children. And around 300,000 people, the vast majority of them civilians, have been killed.

“The birth of South Sudan in 2011 was marked by hope for a peaceful and prosperous future,” said State Department Spokesperson Heather Nauert. “We deeply regret that the second chance made possible by the formation of the Transitional Government of National Unity in April 2016 was squandered. Following the collapse of the permanent ceasefire in July 2016, the armed conflict expanded across the country and the parties to the conflict remain unwilling to return to the negotiating table,” she said.

“The United States remains deeply committed to a stable and inclusive South Sudan, and stresses once again that there is no military solution to this conflict. On this day meant to celebrate South Sudan's creation, we call upon South Sudan's leaders and all parties to end this self-destructive violence, to return to political dialogue, and to help South Sudan realize its full potential.”