What Next in Mosul?

Update Required To play the media you will need to either update your browser to a recent version or update your Flash plugin.
By VOA
Jul 18, 2017

Three years of brutal occupation by ISIS militants, and hard fighting by Iraqi Security Forces and air support by the US-led anti-ISIS Coalition, have left Mosul in ruins. 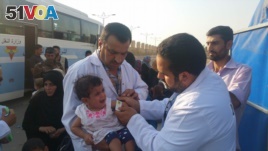 Medics at this collection point for fleeing families treat a baby for malnutrition, which they say is widespread among children in Mosul, Iraq, on July 12, 2017.

Although large-scale fighting is ending, the humanitarian crisis is expected to continue. According to the United Nations, over 900,000 Iraqi civilians have been displaced from Mosul since last October. The city will need a lot of work on its infrastructure, including rebuilding schools, hospitals, streets and bridges.

There is an abundance of explosives and other lethal hazards, placed by ISIS fighters as they fled the city. These must be removed before the rebuilding can begin.

The second stage of freeing Mosul from ISIS is ongoing—rebuilding.

It will take billions of dollars and many years to rebuild the city, says the UN. In anticipation of Mosul's liberation, on July 5th, the United States announced it would provide an additional $150 million to help stabilize the areas in Iraq that had been held by ISIS, and on July 13th, it announced that it was giving an additional $119 million in humanitarian assistance to Iraq.

The stabilization program will help the people of liberated areas return to their homes and resume normal lives by restoring services such as water, electricity, sewage, health, and education. The United States is continuing to provide additional emergency food and nutrition assistance, hygiene kits, improved sanitation, emergency shelter, and protection for the Iraqi people.

As U.S. Secretary of State Rex Tillerson said, “Under Iraqi leadership, the United States and our Coalition partners will continue to work closely with the UN to stabilize liberated areas throughout Mosul, supporting the return of displaced civilians to their homes.”