Update Required To play the media you will need to either update your browser to a recent version or update your Flash plugin.
By John Russell
26 September 2020


On a quiet road in India's capital, some children are learning again after the government closed schools because of the COVID-19 crisis.

The children, ages 4 to 14, carry their books more than 2 kilometers from their homes in a poor neighborhood near the Yamuna River. They gather at a point along the road, where they receive free math, science, English and physical education classes. 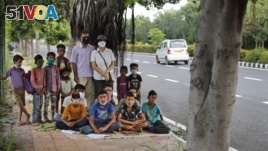 A former diplomat Virendra Gupta and his singer wife Veena Gupta pose for a photograph with underprivileged children whom they teach on a sidewalk in New Delhi, India, on Sept. 3, 2020. (AP Photo/Manish Swarup)

A singer and her husband, a former diplomat, are the teachers in this outdoor "school."

It all began with Veena Gupta's housecleaner, Dolly Sharma. She lives in the same area as the children. She said that with schools shut, children there were running wild and wasting time.

"If they stayed at home doing nothing, they'd become drifters," Sharma said.

Drifter is a term that describes a person who moves from place to place with no purpose or plan.

Veena and Virendra Gupta decided that they should help the young people continue learning until schools reopen.

"They don't have access to internet, their schools are shut and they don't have any means to learn," said Veena. She bought books, pencils, notebooks and other teaching materials.

It was Veena who set up the small, open-air learning site under a tree.

India shut schools across the country in late March. Most remain closed as the number of Covid-19 cases has gone past 5 million. India is currently the second worst-hit country in the world after the United States.

Many of India's private schools turned to distance learning and online classes. But children in most government-run schools do not have that choice because they cannot buy the necessary equipment, like computers and phones.

Nitin Mishra is in Virendra's math class. Mishra's mother is a part-time housecleaner and his father is out of work. The health crisis has severely damaged India's economy.

"There is only one mobile phone in my family and it is usually with my father. I can't study online," Mishra said.

The number of students who gather under the tree has grown over time. Now the Guptas — with help from their driver, Heera — teach three different groups three times a week, morning and evening. Veena also makes sweet treats and drinks for the children to enjoy after their classes.

The Guptas say that teaching the children makes them feel closer to their own grandchildren, who do not live in India.

"My father would make me spend my summer vacation learning the next year's curriculum," said Virendra, who served as Indian ambassador to several countries including South Africa.

"That really boosted my confidence and made me interested in schoolwork. And that is what I am trying to do with these children, so when their school reopens, they are slightly ahead of their class."

Veena said she hopes to find more volunteers to teach the street-side classes.

"It is not about the money that people can ... give, it is about their time," she said. "They should take out (a) little bit of their time, an hour or so, if not every day, every alternate day, and come and help these children."

Rishabh R. Jain reported on this story for the Associated Press. John Russell adapted it for Learning English. Caty Weaver was the editor.

access – n. permission, freedom, or ability to enter, communicate with, or use a place, thing, or person

boost – v. to increase the force, power, or amount of (something)

slightly – adv. not very much, only a little

alternate – adj. used to describe something that happens one time, does not happen the next time, happens again, and so on