Update Required To play the media you will need to either update your browser to a recent version or update your Flash plugin.
By Bryan Lynn
09 August, 2018


The Russian government has criticized the United States for ordering new sanctions against Russia.

The government said Thursday it has begun working on ways to answer the measures. U.S. officials say the order is meant to answer the poisoning of a former Russian spy and his daughter in Britain.

The State Department announced the sanctions on Wednesday. The Reuters news agency said they would restrict sensitive national security controlled goods to Russia.

The announcement said that Russia had broken international law by using a deadly nerve agent against its own nationals.

Former Russian military intelligence official Sergei Skripal and his daughter were poisoned in the English city of Salisbury in March. British officials said they found evidence the substance used in the attack was Novichok, a nerve gas developed in the Soviet Union during the 1980s. 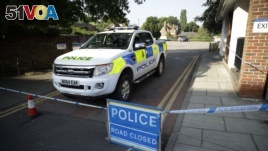 Both Skripal and his daughter survived the attack, but spent weeks recovering in the hospital. Britain, the United States and other nations have accused Russia of ordering the poisonings. The Russian government has repeatedly denied any involvement in the attack.

A Russian Foreign Ministry spokeswoman said Thursday the new sanctions represent a fresh attempt to "demonize Russia." She added that "ultimatums against Russia are useless," and noted the government is considering ways to answer the U.S. restrictions.

A spokesman for Russian President Vladimir Putin called the measures "unfriendly" and "unlawful." The spokesman said the decision goes against a "constructive" process that began when Putin met with U.S. President Donald Trump in Helsinki last month.

Trump has repeatedly stated his desire to improve relations between the two countries. But he has faced criticism from U.S. lawmakers for not taking a stronger position against reported Russian interference in the 2016 U.S. elections.

In March, the United States joined European nations in expelling Russian diplomats to answer the poisonings. But U.S. officials had not yet confirmed the use of banned nerve agents in the attack.

British Prime Minister Theresa May welcomed the decision. In a statement, she said the U.S. action sends a clear message to Russia that its "reckless" behavior will not go unanswered.

Bryan Lynn wrote this story for VOA Learning English. His story was based on reports from the Associated Press, Reuters and Agence France-Presse. George Grow was the editor.

sanction – n. an order given to limit or stop trade under international law

ultimatum – n. a statement that you will do something that will affect someone badly if they do not do what you want

alleged – adj. said or thought by some people to be true, but without specific proof

lethal – adj. able to cause or causing death

reckless – adj. showing a lack of care about risks or danger