A School System in Maine Gives iPads to Kindergartners

Update Required To play the media you will need to either update your browser to a recent version or update your Flash plugin.
By VOA
2011-11-23 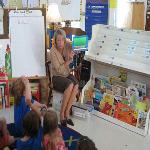 Nine years ago, Maine became the first American state to provide laptop computers to all seventh and eighth graders in public schools. The northeastern state has since expanded that program to about half of its high schools. Now, one school system in Maine has launched a project to provide tablet computers -- the Apple iPad -- to all kindergarteners.

Some people have criticized the project as a waste of money. But school officials expect it to increase learning.

Laurie Gerard teaches five- and six-year-olds at Sherwood Heights Elementary School in Auburn, Maine. Before the students collect their iPad, they say a rhyme to remind them how to be careful with it.

LAURIE GERARD AND STUDENTS: "Fingers on the bottom, thumbs on top, that way my iPad won't drop."

Ms. Gerard plans to use different applications to help her create a learning plan for each student. The iPads have been in her classroom since the school year began in September.

The principal of the school, Laura Shaw, says the iPads quickly let children know if they answer questions correctly.

LAURA SHAW: "Kids, especially in kindergarten, are very hands-on and learn best when they're actually manipulating information and manipulating objects. When you have eighteen kids in the classroom and you see ten kids, hands raised up, the teacher does her best to get around. But sometimes with the iPads and certain apps the kids get immediate feedback. They know what they've done is correct and they can move on, or they know 'Oh, I need to ask for help.'"

Almost three hundred kindergarteners in Auburn are using iPads this year. Project coordinator Mike Muir says he believes the computers can help students improve in reading and math. Less than two-thirds of the third graders in the school system are at what are known as benchmark levels..

MIKE MUIR: "One of our literacy interventionists was working with several of her students, and, having a hard time with helping them be successful, she finally pulled out her own personal iPad and had them work on some apps for letter recognition and letter formation, and they met the benchmark very quickly and even as she moved on to other topics with these students, they retained that level of mastery."

School districts in other states including South Carolina, Tennessee and Illinois are also using iPads. The project in Maine costs two hundred thousand dollars. Most of that money is from the state and the federal government.

Not everyone supports the project. Computer science professor Elliot Soloway at the University of Michigan studies technology in education.

Is the iPad an effective learning tool? Educators in Maine plan to give a report at the end of the school year.