Number of Foreign Students in US Continues to Rise

Update Required To play the media you will need to either update your browser to a recent version or update your Flash plugin.
By Ira Mellman
2011-11-16 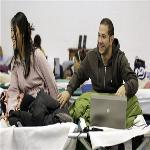 The number of international students at colleges and universities in the United States has increased for the fifth year.

The Institute of International Education in New York released its annual "Open Doors" report this week. It says a record high of more than seven hundred twenty thousand students from other countries studied in America during the last academic year. The number was five percent higher than the year before and almost one-third higher than ten years ago.

Peggy Blumenthal at the institute says Chinese students are now studying throughout the United States.

PEGGY BLUMENTHAL: "Ten, twenty years ago, students from China only knew of a handful of U.S. institutions, but now they are enrolling in our community colleges, in our small liberal arts institutions, in the research universities -- really spread across the country."

Ms. Blumenthal suggests one reason for the increase is a lack of space in Chinese colleges for everyone who wants an education. She says students and their parents are also looking for a different educational experience.

More international students study in California than any other state, followed by New York, Texas, Massachusetts and Illinois. For the tenth year in a row, the University of Southern California in Los Angeles led the country, with more than eighty-six hundred foreign students.

The most popular area of study for international students is business and management, followed by engineering.

Some schools are making special efforts to welcome students from other cultures. Workers greet students in different languages at a dining hall that the University of California, Los Angeles, spent five million dollars to modernize.

Peter Angelis is an assistant vice chancellor at UCLA. (He says forty percent of the students are Asian, and opinion surveys showed that students wanted more Asian foods.)

PETER ANGELIS: "We conduct a survey annually to find out what our students like and don't like about residing on campus. And consistently, through these surveys, we've heard over and over again that cuisines from the various regions of Asia are our students' preferred choice for food. In fact, Japanese food is their top choice overall."

"On top of this we recognize here at UCLA that we have a large student population here on campus. Roughly forty percent of our undergrad students are from families with roots to countries throughout Asia. The best way to celebrate this cultural diversity is through cuisine and through food."

The "Open Doors" report says about forty-five percent of international students in the United States are women. Almost two-thirds of all foreign students receive the majority of their funding from personal and family sources.

The report is published in partnership with the State Department. You can find a link to the full report at 51voa.com.