Ani DiFranco Is Back With 'Which Side Are You On'

Update Required To play the media you will need to either update your browser to a recent version or update your Flash plugin.
By Christopher Cruise and Caty Weaver
2012-1-19 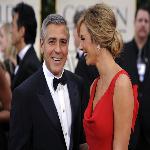 We also tell about a sportswriter who fought cancer and continues in his dream job ...

Movie and television stars gathered earlier this week for the Golden Globe Awards. The ceremony in Beverly Hills, California, is organized by the ninety or so members of the Hollywood Foreign Press. They honor the movies, actors, directors and others in the industry whose work they considered the best of the year. Christopher Cruise has more.

CHRISTOPHER CRUISE: The top prize for movies went to "The Descendants" for best drama and "The Artist" for best musical or comedy. "The Artist" is an unusual film for the twenty-first century. It is mostly silent. French filmmaker Michel Hazanavicius explores that time period in film. Jean Dujardin stars in "The Artist," as a silent film star whose career is ending. His performance won him a Golden Globe for best actor in a musical or comedy.

George Clooney starred in "The Descendants." He won the Golden Globe for best actor in a drama. He plays a man whose wife goes into a coma following a boating accident. Shailene Woodley plays his teenaged daughter who informs her father of a painful truth about her mother.

MATT: "I have to go around and tell people what's happening ... family and a few close friends."

ALEX: "I don't want to talk about Mom with anyone."

MATT: "Look, whatever you two fought about, you have to drop it. Grow up."

ALEX: "You really don't have a clue, do you? Dad, Mom was cheating on you."

GEORGE CLOONEY: "When you see the film, the thing that is Alexander's specialty is his ability to switch on a dime from funny to really sad. It's really hard to do well. And it's hard as an actor to judge that. Only he knows where he wants it to be so you really just have to go 'you tell me when I've gone too far or not far enough."

The Hollywood Foreign Press honored Meryl Streep with an eighth Golden Globe at this year's ceremony. She won the best actress in a drama award for her performance in "Iron Lady." She portrays former British prime minister Margaret Thatcher in the film. Michelle Williams also earned a Golden Globe for her performance of a historical character. She starred as Marilyn Monroe in the film "My Week With Marilyn."

The Hollywood Foreign Press also names a best foreign film of the year. This year's winner was from Iran. "A Separation" tells about an unhappy married couple. The wife wants to leave Iran with their daughter for a better life. The husband wants to stay in Iran to care for his father who has Alzheimer's disease. The complexities deepen when the husband hires a young pregnant and very religious caretaker for his father.

Director Asghar Farhadi has made four other films. This is his first Golden Globe award although he has won many other international film honors. In "A Separation" he cast his own daughter Sarina to play the couple's conflicted eleven year old daughter. The movie has received a huge amount of critical praise. Roger Ebert of the Chicago Tribune called in an enduring masterpiece.

British comedian and actor Ricky Gervais led the Golden Globes ceremony again this year. It was broadcast in more than one hundred sixty countries. The American movie industry has increased its respect for the Golden Globes over the years. Most people in the business place the honors second in importance only to the Academy Awards. Many also believe the Golden Globes are a good predictor of who and what will win Oscars.

FAITH LAPIDUS: Getting a job as a sports journalist is a difficult thing to do in the United States. Many people are interested in the work – few positions are available. Sports journalists get to meet and interview athletes, coaches and others in the industry. June Simms tells about one man who would not let anything, even cancer, block his career path.

JUNE SIMMS: The profession of sports journalist remains only a dream for most people. But Arash Markazi has realized his dream as a writer for the sports television network ESPN. 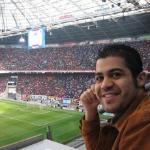 But the road has not been smooth for Mr. Markazi, who is now thirty-one. More than ten years ago, while working for his college newspaper, he was given the worst news possible.

ARASH MARKAZI: "I had done a story about a basketball player that had Hodgkin's. I didn't even know what it was. I had to do research. The parents were crying and I said 'This is exactly why I got into sports journalism so I wouldn't have to cover stories like this.' I didn't want to talk about kids getting cancer or anything like that. And then lo and behold, like a year later I get the same kind of cancer."

Cancer did not stop him. After he recovered, Mr. Markazi landed his dream job with Sports Illustrated magazine in New York City. Then, his cancer came back. He spent his recovery time making plans.

ARASH MARKAZI: "When I was in the hospital I made a list of the games I wanted to go to and the events that I wanted to cover because I couldn't just think about my current situation."

Now, he has attended all of the events he put on his list. When he is not traveling the world, he writes about teams in Los Angeles, California. But at this point in his career and after recovering from cancer twice, he looks at sports and his job in a different way.

ARASH MARKAZI: "I remember when I was younger I would cry when my team lost. But now, it really doesn't matter to me who wins the game. I just want a good story. When I'm at a game I'm rooting for the guy who never played to get in the game and to write about him."

He says cancer helped him value what is really important.

ARASH MARKAZI: "It made me appreciate life a lot more. I think the one thing when people meet me, they say 'You are really happy. Why are you always so happy?' And I say, 'Because I woke up this morning. And I'm living and I'm breathing and I'm talking to you right now.' It's odd for someone in their twenties to be happy because they woke up in the morning and they're alive."

FAITH LAPIDUS: Folk singer Ani DiFranco just released her first record album in more than three years. It was an unusually long break between albums. For a long time, DiFranco was known as an album a year musician. Barbara Klein tells about her new release, "Which Side Are You On." 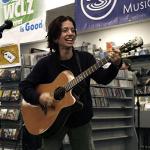 Ani DiFranco performs at a record store in Maine in 2009
BARBARA KLEIN: That is Pete Seeger performing a protest song that he made famous. "Which Side Are You On" was written in nineteen thirty-one by Florence Reese, an activist for the safety and rights of mine workers.

Pete Seeger is a major influence on Ani DiFranco. She describes him as her "forefather in folk music and political song." DiFranco says she felt moved to record this song after she was invited to perform at his ninetieth birthday celebration a few years ago. Here is their recording of "Which Side Are You On." Several children's music groups took part in the production.

Ani DiFranco has good reason for slowing down the studio productions. In two thousand seven, she had a baby girl, her first child. She married the father and her professional partner Mike Napolitano in two thousand nine.

DiFranco has been able to find success in writing and singing about issues of importance to her. One of the songs on "Which Side Are You On" is "Lifeboat," a song about the pain of homelessness.

"Which Side Are You On" also has some beautiful love songs. We leave you with one. This is "Albacore."

FAITH LAPIDUS: I'm Faith Lapidus. This program was written by Christopher Cruise and Caty Weaver, who was also our producer. We had additional reporting from Tala Hadavi, Penelope Poulos and Alan Silverman.

If you have a question about American life, please email us. The address is mosaic@voanews.com.