For Seniors, When Home Becomes a 'Virtual Village'

Update Required To play the media you will need to either update your browser to a recent version or update your Flash plugin.
By Christopher Cruise and Caty Weaver
2012-1-12

I'm Faith Lapidus. Today on our show, we play music from some of the artists performing at this year's Coachella Music Festival in California ...

We also report about some new mummy exhibits ...

But first, we visit some "virtual villages" for seniors in the northwestern United States...

Many older Americans spend their final years in a nursing home or assisted living center. These places provide services that help older adults with activities they can no longer do on their own. However, most people say they would like to remain in their own homes. Now, there are nonprofit groups that help them do that. June Simms has more.

JUNE SIMMS: Philip Theil is ninety-one years old and lives with his wife in an old house in Seattle, Washington. And he wants to keep it that way.

PHILIP THEIL: "As far as I'm concerned, I would not like to leave this place. Living in a group situation is something I couldn't tolerate. I'd kill myself before I had to do that."

Mr. Theil says he and his wife can take good care of themselves in their two-level house. But he and his wife know they will soon need help with simple housework. Work like changing a light bulb that hangs at the top of the stairs.

PHILIP THEIL: "I have to bring in a stepladder and put it partly on the landing and partly on the stairs and to climb up. It's kind of trepidatious."

In the past, an older American would ask one of their children or a neighborhood teenager to change the light bulb. But here, those young helpers have grown up and gone.

PHILIP THEIL: "We have kids and we call them occasionally. But one lives in Munich, Germany, another other lives in London and the third lives in Los Angeles. They're not going to drop around for a weekend call type of thing."

So the Theils are considering joining a "virtual village." This is a local group of volunteers and service providers that help older adults age in place. They might help these adults with anything from transportation to small home repairs and dog walking.

The virtual village idea was first developed about ten years ago in Boston, Massachusetts. The idea has spread to an unofficial network of villages around the country. One hundred fifty are currently in development. 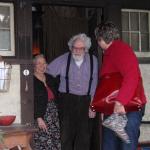 JUDY KINNEY: "When someone calls us, they may say, 'I need help with transportation.' We're going to be able to work with them to see if it is a volunteer that helps, if it's is a vetted vendor that helps or there is a community service in place. So that's a process we're going to do when someone picks up the phone. People have called it a concierge. People call and say I need this help. We help you figure out the best choice."

Ms. Kinney's group is one of about five expected to open in the Pacific Northwest in the next few months. Such a village is already operating in central Oregon. There, the most requested services are rides to the doctor, home repairs and help with buying food or medicines.

Tom La Pointe is opening "My Own Home" is Moscow, Idaho. He thinks snow removal will be among the most requested services there. But he says general yard work and computer support also will be popular.

TOM LA POINTE: "On the other hand if you need daily care, 24/7 care, that is not what we do. We don't do bathing services for example. We are here and we exist for the folks who might need a little extra assistance."

Tom La Pointe notes that "My Old Home" is not a charity. Senior citizens will have to pay to join his nonprofit group. Mister La Pointe says it will meet the needs of the seniors who are too rich for public assistance but too poor to hire workers. He hopes forty people will become members by the end of this year. 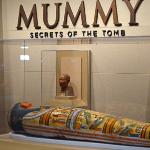 The Virginia Museum of Fine Arts in Richmond

FAITH LAPIDUS: Mummies are very popular in the United States. Many Americans have stood in line to see a King Tut exhibit as it travels across the country. They are also finding mummified remains in other American museums. Christopher Cruise tells us more.

"THE MUMMY": "Death ... eternal punishment for anyone who opens this casket."

CHRISTOPHER CRUISE: The film, "The Mummy" was released in nineteen thirty-two. Mummies have been a part of American popular culture ever since. But Egyptologist Salima Ikram says people have been interested in the culture of ancient Egypt for thousands of years.

SALIMA IKRAM: "Even the Greeks and Romans were coming there as tourists."

SALIMA IKRAM: "I'm hoping that people will engage with ancient Egypt, not just as a bunch of dead people, but a bunch of people who were living just like you and I are."

Mummies had been shown at the Natural History Museum for many years, but for the past year they were in storage. The museum's Melinda Zeder says the public demanded their return.

MELINDA ZEDER: "We had a real outpouring from our fans from across not only Washington, but the country, wanting to know when we were we going to bring the mummies back."

Now more mummies are being shown, with more information about who these people were and how they lived. The new information was discovered in part from images known as CT scans. The scans tell a lot about the mummies. Scientist Bruno Frohlich made the images in his laboratory.

That technology is also being shown at an exhibit at the Virginia Museum of Fine Arts in Richmond, Virginia. It is called "Mummy: Secrets of the Tomb." Visitors see a film before they enter the exhibit.

FILM: "Now for the first time since his body was mummified, you will be able to see what he really looked like."

ANNE MARTIN: "That we are able to get inside of the sarcophagus and coffins to see what these folks looked like and what they were buried with was really interesting."

The movie helps people understand the more than one hundred ancient works in the exhibit. They are on loan from the British Museum. Virginia Museum of Fine Arts director Alex Nyerges says the exhibit has been popular since it opened in November.

ALEX NYERGES: "The child in every one of us has been drawn to the exhibition. 'Mummy: Secrets of the Tomb,' how can you want to avoid that?"

There are four mummies in the exhibit. All of them are covered in their original wrappings. Three of them are still in the coffins in which they were buried.

ALEX NYERGES: "That is one of the attractions of this exhibition. You are in the presence of people who lived and breathed and walked this earth, thirty-five hundred years ago."

But that's only part of the attraction for museum visitor Jack Barnes.

FAITH LAPIDUS: The Coachella Valley Music and Arts Festival is held every April in the desert town of Indio, California. This week organizers announced the performers for the event this spring. Shirley Griffith has our story.

SHIRLEY GRIFFITH: Coachella got bigger than ever this year. Now the event includes six days of shows. They will be spread out over two weekends from April thirteenth to the twenty-second. Organizers decided this after the three-day festival last year sold out in six days. A founder of Coachella said seventy-five thousand three day passes were sold. 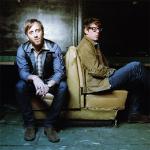 Dan Auerbach, left, and Patrick Carney are the Black Keys

This year the Black Keys is among the starring acts at Coachella. The two-member group released its seventh album, "El Camino," last month. It sold more than two hundred thousand copies in its first week and entered Billboard magazine's Top 200 albums chart at number two.

"Lonely Boy" was the first single from "El Camino."

Coachella traditionally brings together new acts and musicians that have been performing for a long time. One of the greats performing this year is reggae artist Jimmy Cliff.

Festival goers can also see the Vermont band Grace Potter and the Nocturnals. You may not heard of this group before, but you might know some of their songs. Several have been used on television programs. We leave you with Grace and the Nocturnals performing the song "Falling or Flying."

FAITH LAPIDUS: I'm Faith Lapidus. This program was written by Christopher Cruise and Caty Weaver, who was also our producer.