Georgia O'Keeffe, 1887-1986: Her Paintings Showed Her Love for the American Southwest

Update Required To play the media you will need to either update your browser to a recent version or update your Flash plugin.
By Caty Weaver
2011-11-26 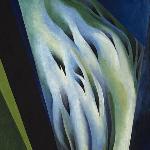 STEVE EMBER: And I'm Steve Ember with People in America in VOA Special English. Today we tell about one of the greatest painters of the twentieth century, Georgia O'Keeffe.

GWEN OUTEN: America has produced many great painters in the past one hundred years. Georgia O'Keeffe is one of the most popular and easily recognized artists. People do not mistake her work for anyone else's. People can immediately identify her paintings of huge, colorful flowers or bones in dream-like deserts.

Georgia O'Keeffe said she did not know how she got the idea to be an artist. But, she said, the idea came early. She remembered announcing when she was twelve years old that she planned to be an artist.

STEVE EMBER: Georgia was born in eighteen eighty-seven, the second of seven children. Her parents were successful farmers in the middle western state of Wisconsin.

Georgia's mother also had cultural interests. She made sure that Georgia and her sisters studied art, in addition to their usual school subjects. By the time Georgia was sixteen, the O'Keeffe family had moved to Williamsburg, Virginia.

After Georgia finished school, she attended the Art Institute of Chicago, Illinois. Georgia was especially pleased with the help she got from her teacher, John Vanderpoel. She later wrote that John Vanderpoel was one of the few real teachers she knew.

GWEN OUTEN: In nineteen-oh-seven, O'Keeffe began a year at the Art Students League in New York City. The famous painter William Merritt Chase was one of her teachers. Chase had a great influence on O'Keeffe's early artistic development. She described him as fresh, full of energy and fierce. She seemed to understand and agree with his style of painting.

Then, in nineteen-oh-eight, Georgia O'Keeffe left the world of fine art. She moved back to Chicago and worked in the advertising business. She drew pictures of products to be sold. Her parents had been struggling financially for some time in Virginia. Later, her mother became sick with tuberculosis. Some art historians suspect these were the main reasons Georgia O'Keeffe spent four years in business instead of continuing her studies.

STEVE EMBER: In nineteen twelve, O'Keeffe returned to art school at the University of Virginia in Charlottesville. Artist and teacher Arthur Wesley Dow taught that art should fill space in a beautiful way. This theory influenced and changed her work.

O'Keefe also learned about the Russian painter Wassily Kandinsky. He wanted artists to represent the inner spirit in outer things. O'Keeffe considered Kandinsky's writings a treasure. She read them throughout her life.

GWEN OUTEN: In nineteen fifteen, Georgia O'Keeffe decided that much of what she had been taught in art school was of little value. She decided to hang recent work she had done on the wall of her home. She examined it and did not find herself in the art. She wrote that she had been taught to work like others. She decided then that she would not spend her life doing what had already been done.

Georgia O'Keeffe began to search for her own style. She used only charcoal, the black material made from burned wood. In her book about her life, she wrote that she decided to limit herself to charcoal until she found she really needed color to do what she needed to do. She wrote that six months later she found she needed the color blue. She used it for a watercolor painting she called "Blue Lines."

STEVE EMBER: Georgia O'Keeffe had met the famous art critic and photographer Alfred Stieglitz at his New York City gallery in nineteen-oh-eight. Their friendship grew as they wrote letters to each other. In nineteen fifteen, O'Keeffe told a friend that she wanted her art to please Alfred Stieglitz more than anyone else.

That friend showed O'Keeffe's charcoal drawings to Stieglitz.? Stieglitz liked her drawings enough to show them in his art gallery, called Two Ninety One.

GWEN OUTEN: Alfred Stieglitz was a major force behind shows of Georgia O'Keeffe's work for the next twenty-five years. Her first individual show at his gallery was well received. She sold her first piece at that show in nineteen seventeen.

The relationship between O'Keeffe and Alfred Stieglitz was not an easy one. O'Keeffe once said that to her "he was much more wonderful in his work than as a human being." But, she also said she loved him for what seemed "clear and bright and wonderful." The two remained married until his death in nineteen forty-six.

STEVE EMBER: Georgia O'Keeffe also had a long love relationship with the southwestern part of the United States. The desert environment was the subject of many of her paintings. O'Keeffe had moved to the state of Texas when she was twenty-five. She accepted a two-year position as supervisor of art in the public schools of Amarillo, Texas. 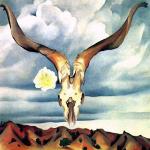 Later, she taught in a small town. She wrote about long walks on narrow paths in a canyon near that town. The dangerous climbs in and out of the canyon were like nothing she had known before. She wrote that many paintings came from experiences like that.

In one such painting, the canyon is shown as a huge deep hole of many colors -- reds, oranges and yellows. It looks as if it is on fire.? The canyon fills most of the picture. A small area of blue sky in the distance lends additional depth to the picture.

GWEN OUTEN: In nineteen thirty, Georgia O'Keeffe began spending most of her summers in the state of New Mexico. She called it "the faraway." She painted big pictures of desert flowers and the high rocky hills. She also began to paint pictures of the bones she found during walks near her summer home. Most of her paintings share the qualities of largeness of subject and richness of color.

The artist discussed those two qualities in her book, called "Georgia O'Keefe." She wrote that color is more exact in meaning than words. Later, she wrote that she found she could say things with color and shape that she could not express in words.

She also spoke of a special need to paint her subjects larger than they are in life. She seemed to want to force people to see more deeply into objects such as flowers. She tried to show the different shapes and colors within a single flower. The artist said she would make even busy New Yorkers take time to see what she saw in flowers.

STEVE EMBER: O'Keeffe was angered by some criticism of her work over the years. She rejected critics' claims that there was deep sexual meaning in her paintings of flowers. She said that people linked their own experience of a flower to her paintings. She suggested that critics wrote about her flower paintings as if they knew what she was seeing and thinking. But, she said, they did not know.

Georgia O'Keeffe always argued that what others think of the artist's work is not important. She once wrote to a friend, "... I'll do as I please."

GWEN OUTEN: Georgia O'Keeffe bought her first house in New Mexico in nineteen forty. After Alfred Stieglitz died, she moved to "the faraway'" permanently. She lived in New Mexico for the rest of her life.

In the early nineteen seventies, O'Keeffe began losing her sight because of an eye disease. She stopped working with oil paints, but continued to produce watercolor paintings.

Around the same time, she met a young artist who would become very important to her. Juan Hamilton made pottery -- objects of clay. He became O'Keeffe's assistant and friend. They also traveled together. But in the early nineteen eighties Georgia's O'Keeffe's health failed severely. She died in nineteen eighty-six. She was ninety-eight.

STEVE EMBER: Georgia O'Keefe received many honors during her long life. President Gerald Ford presented her with the Medal of Freedom in nineteen seventy-seven. Eight years later, President Ronald Reagan awarded her the National Medal of Arts. Students and experts continue to study and write about her work.

Her paintings are shown around the world. And, more than one million people have visited the Georgia O'Keeffe Museum in New Mexico since it opened in nineteen ninety-seven.

GWEN OUTEN: This program was written by Caty Weaver. It was produced by Lawan Davis. I'm Gwen Outen.