Seeking to Secure All Nuclear Materials in Four Years

Update Required To play the media you will need to either update your browser to a recent version or update your Flash plugin.
By VOA
2010-4-16 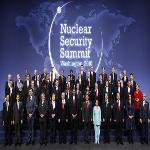 World leaders agreed this week to protect all nuclear materials within four years to stop the possibility of nuclear terrorism.

Leaders from forty-seven countries gathered in Washington for President Obama's Nuclear Security Summit. The president said groups like al-Qaida would surely use a nuclear weapon if they got one.

BARACK OBAMA: "All this, in turn, requires something else, which is something more fundamental. It will require a new mindset -- that we summon the will, as nations and as partners, to do what this moment in history demands."

Progress on a work plan for securing nuclear materials can be discussed when South Korea holds the next summit in two years.

Several nations made individual promises, including Ukraine. It promised to give up all of its highly enriched uranium by two thousand twelve.

The United States and Russia signed an agreement to dispose of sixty-eight tons of weapons-grade plutonium. They plan to use the plutonium as fuel for civilian nuclear reactors.

Last week, President Obama and Russian President Dmitri Medvedev signed a nuclear arms agreement in the Czech Republic. It calls for America and Russia to each deploy a limit of one thousand five hundred fifty long-distance nuclear weapons -- a cut of about thirty percent. 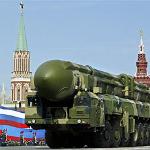 The new agreement replaces the nineteen ninety-one Strategic Arms Reduction Treaty, known as START-One. The United States Senate and Russia's parliament must both approve the agreement for it to take effect.

One country that did not attend the Nuclear Security Summit was Iran. Discussions about Iran's nuclear activities have intensified among the five permanent United Nations Security Council members and Germany. U.N. ambassadors from the five Council members and Germany met two times this week in New York. The Obama administration is pushing for a new U.N. resolution with actions against Iran.

After talks on Wednesday, France's ambassador said they were starting to negotiate on the substance of possible new measures. China's ambassador called the talks "very constructive" and said they will continue. He said the six countries had a better understanding of each other's position.

In Washington, a military intelligence official told a Senate committee that Iran could be one year away from producing enough highly-enriched uranium for a nuclear weapon. But another military official said Iran would still need three to five more years to create such a weapon.

Iran is holding its own nuclear conference in Tehran this Saturday and Sunday. The Iranian government says its nuclear program is for peaceful, civilian purposes only.

President Mahmoud Ahmadinejad told Iranian television that Iran is seeking cooperation and negotiation with world powers. But he also said his country was willing to deal with a plan that protects Iran's rights, includes its independence and leaves out the nuclear issue.