Looking for a Solution to Syria

Update Required To play the media you will need to either update your browser to a recent version or update your Flash plugin.
By VOA
2012-2-10 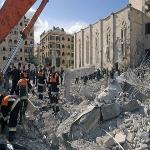 Photo: Reuters
Syrian workers inspect the site of an explosion outside a military security building, one of two sites of bomb blasts in Syria's northern city of Aleppo.

Arab League foreign ministers are expected to meet in Cairo on Sunday to discuss sending observers back to Syria. A new plan calls for sending a joint observer team from the Arab League and the United Nations.

The league sent observers in December as part of an agreement with the Syrian government to halt the violence in the country. But the observers withdrew in late January to protest continued attacks on demonstrators.

Last Saturday Russia and China blocked another effort by the U.N. Security Council to condemn the violence in Syria. The unrest began in March.

Syrian government forces have been attacking rebellious areas across the country, especially in the city of Homs. Activists say hundreds of people have been killed since the offensive in Homs began a week ago. "Homs is becoming a ghost city," one activist told VOA. "No one is walking in the streets ... Our situation is miserable."

Because of restrictions on reporting in Syria, VOA cannot independently confirm reports from the government or the opposition.

The northern city of Aleppo has been relatively quiet since the unrest began. But on Friday, Syrian television reported that two explosions killed at least twenty-eight people and wounded more than two hundred thirty others. The explosions targeted a military intelligence building and a base for security forces.

Syrian TV blamed what it called "armed terrorists" for the attacks. But a rebel leader who heads the Free Syrian Army denied responsibility. He accused the government of being responsible.

We spoke on Skype with a man who said one of the explosions happened about two kilometers from his home and awakened him. We agreed not to use his name. We asked him what he thinks about the future of Syria.

MAN: "Many people believe, or let's say more than seventy percent of Syrian people, believe that the revolution will eventually win. And I think so because day after day we see that there are many hits, or many people hate this regime because of shelling Homs, if you heard the news about the city of Homs. The security forces of the regime [are] hitting and shelling the houses. And that means that everybody hates them because they are killing our people."

American Ambassador Susan Rice said the United States was "disgusted" that Russia and China had again blocked action. She noted that the proposed resolution said nothing about sanctions, an arms boycott or military intervention. She also criticized Russia for continuing to sell weapons to the Syrian government.

SUSAN RICE: "For months this council has been held hostage by a couple of members. These members stand behind empty arguments and individual interests while delaying and seeking to strip bare any text that would pressure Assad to change his actions."

Russia's ambassador, Vitaly Churkin, said his country felt it had no other choice but to veto the resolution.

VITALY CHURKIN: "We were trying to suggest that we continue our discussions in order to reach consensus, so we were prepared for an extra mile, it was our colleagues who did not accept it."