Rains End Famine in Somalia, but Millions Remain at Risk

Update Required To play the media you will need to either update your browser to a recent version or update your Flash plugin.
By VOA
2012-2-3 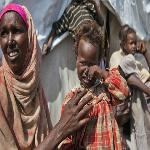 Photo: AP
A mother and child at a camp in Mogadishu. Many Somalis remain at risk because of hunger and conflict.

This week, the United Nations declared an official end to the famine in southern Somalia. Recent rains, an improved harvest and a major humanitarian aid effort during the past six months helped reduce the threat of starvation.

But the new head of the U.N. Food and Agriculture Organization says millions of people are still at risk. Director-General Jose Graziano da Silva says conditions could again worsen unless the aid continues during the next one hundred days.

JOSE GRAZIANO DA SILVA: "If we do not keep in support, especially those three months that we have in drought season until came the rain season in April, those people will not survive. We will have famine back."

Mr. da Silva traveled this week to southern Somalia. On Friday he told reporters in Kenya that no more areas of Somalia are under famine conditions. But in his words, "good news does not mean that the crisis is over."

JOSE GRAZIANO DA SILVA: "We still have a huge problem in the region particularly in Somalia and also in the other countries that you know are facing similar situation like the Sahel region in particular the South Sudan.''

United Nations officials now list the situation in Somalia as a "humanitarian emergency" instead of a famine. "Famine" means two adults or four children per ten thousand people die of hunger each day and a third of children are severely malnourished.

The United Nations says tens of thousand of people have died since the famine was first declared in parts of southern Somalia in July. Now, refugees have started slowly returning after a good harvest in the recent rainy season.

Hundreds of thousands of Somalis fled to camps in Kenya, Ethiopia and the Somali capital, Mogadishu, in search of food and water. Part of the problem: the militant group al-Shabab has restricted international aid in the areas it controls.

In any conflict area, helping those in need can require complex negotiations and compromise. The medical aid group Doctors Without Borders works in many conflict areas, including Somalia. The group is also known as MSF, for Medecins Sans Frontieres in French. The group has published a book called "Humanitarian Negotiations Revealed: The MSF Experience."

In recent years, medical and humanitarian workers have been increasingly in danger.

Michael Neuman is director of the MSF research center in Paris and co-author of the book. He says there is no way to avoid negotiation if medical treatment is to be provided in conflict areas. Negotiations center on a search for common interests between different sides and opposing groups. In the end, he says, "you fight for what you believe in to the maximum, but know that you may not achieve it all."