Update Required To play the media you will need to either update your browser to a recent version or update your Flash plugin.
By Mario Ritter
29 October, 2017


An agency of the United States government says the effects of climate change cost American taxpayers billions of dollars each year.

In a new report, the GAO tries to estimate the amount of federal money spent on disasters related to climate change.

The agency considered the possible economic effects of slowly rising temperatures in Earth's atmosphere and risks to the government. It used information about possible weather conditions based on climate models.

A study from the National Research Council notes how large numerical models have become an important tool for climate scientists. Computer programs turn information about the physical world, such as chemical and biological processes, into mathematical operations.

The new GAO report looked at the financial costs of extreme weather events and wildfires in the United States. The report says these have cost the government more than $350 billion over the past 10 years.

The costs are estimates for federal disaster assistance programs. They include the cost of flood and crop insurance payments. This money helps businesses, homeowners and farmers pay for damages caused by a natural disaster.

The GAO warns that costs from storms, floods, wildfires and droughts are likely to rise in the years to come.

The costs noted in the report do not include the cost of three major hurricanes and wildfires this year. They are based on earlier numbers from the federal Office of Management and Budget.

Congress approved $15.3 billion in disaster-related aid in September after Hurricane Harvey struck Texas and parts of the southeastern United States.

That storm and two other hurricanes caused major flooding and wind damage in Texas, Florida and other states, and the island of Puerto Rico.

The GAO report predicts that disaster-related costs will only grow in the future. It notes, "Climate change impacts are already costing the federal government money, and these costs will likely increase over time as the climate continues to change."

Estimating the cost of disasters linked to climate change, however, is difficult. This is because severe weather happens all the time. 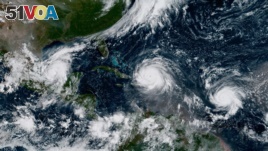 The National Oceanic and Atmospheric Administration, or NOAA, keeps detailed information about Earth's climate. It estimates that by the year 2100, the average temperature will be between 1.1 and 5.4 degrees Celsius higher than it is today.

NOAA notes that sea levels are slowly rising. Scientists' computer models predict a rise of between two tenths of a meter and two meters by the end of the century.

These estimates come from computer models. They are based on what scientists currently know about weather systems.

The writers of the report admit there are many unanswered questions when creating climate models, and limited or incomplete information about areas that would be affected.

They conclude that it is not possible to know the costs that can be directly attributed to climate change. The report gives widely varying cost estimates.

Yet the researchers also write: "The impacts and costs of extreme events – such as floods, drought and other events – will increase in significance as what are considered rare events become more common and intense because of climate change."

The report provides examples of places thought to be at high-risk of damage from severe weather linked to climate change. They include increased damage to roads, bridges and other infrastructure in the American Southeast and also the New York City area.

Deaths from higher than average heat could be more common in places like Florida, Texas and New Mexico. And water supplies in California could be lower than average.

The report noted that climate change may help some areas. It said warmer weather could help agriculture in some Northern states, and reduce deaths resulting from cold weather in places like Minnesota.

What concerns the GAO the most, say researchers, is that the U.S. federal government has not effectively planned for costs that happen again and again. The report says the government needs to identify climate-related risks as "high-risk."

Senators Susan Collins of Maine and Maria Cantwell of Washington requested the report. Collins belongs to the Republican Party, like President Donald Trump, and Cantwell is a Democrat.

With the report, the GAO made a suggestion. It said the office of the president and federal agencies should use information about climate change costs to identify risks.

Once the risks are identified, it says a plan to identify and prioritize ways to reduce the risks should be developed.

The Associated Press reported this story. Mario Ritter adapted the report for VOA Learning English. George Grow was the editor.

insurance – n. an agreement in which a person or company makes pays for some level of protection against financial losses resulting from a disaster, health problem or death

conclude – v. to find that, to form an opinion

attribute – v. to say that something exists because of some cause

vary – v. to experience change; to differ from other members of a group

prioritize – v. to place in order of importance