Update Required To play the media you will need to either update your browser to a recent version or update your Flash plugin.
By John Russell
17 December 2022


Restaurants, farmers, and food businesses are turning to chemistry and physics to deal with the problem of food waste.

Some companies are testing coverings to slow the ripening process in fruit and packets to keep food fresh. Others are developing digital sensors that can tell when meat is safe to eat. 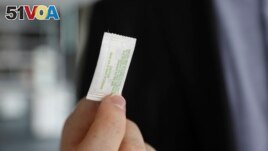 In this photo taken Monday, Oct. 24, 2022, in Chicago, Patrick Flynn, a co-founder of Hazel Technologies, holds a sachet designed to slow the ripening of process of various fruits. (AP Photo/Martha Irvine)

The group estimates that in 2019, around 35 percent of food available in the U.S. — worth about $418 billion — went unsold or uneaten. The U.S. Environmental Protection Agency says that food waste is the largest kind of material placed in local waste areas. And the agency notes that rotting food releases methane, a gas that is not good for the environment.

ReFed estimates 225,000 kilograms of food could be kept out of waste areas each year with special, high-tech coverings.

Many companies are working on ways to help reduce food waste.

Sweden-based Innoscentia is developing a sensor that can show if meat is safe to eat by measuring the buildup of microbes inside its container. And Ryp Labs, based in the U.S. and Belgium, is working on a sticker for fruits and vegetables that would release gas to slow ripening.

SavrPak has developed a plant-based packet that can fit inside a container and take in moisture, helping keep the food inside hotter and crispier.

But the cost can be a barrier for some companies and shoppers. Kroger, the largest food-store company in the U.S., ended its deal with Apeel Sciences this year. The deal ended because Kroger said shoppers were not willing to pay more for fruits with Apeel's special covering to keep them fresh.

Apeel says its special covering is made of common food additives. It says treated avocados can last a few extra days, while treated oranges can last for several weeks. The company says that it continues to talk to Kroger about other future technology.

Another big issue is how to deal with different care requirements for different kinds of food to prevent waste.

"There is no one major change that can improve the situation," said Randy Beaudry of Michigan State University's school of agriculture.

Beaudry said the complexity of the issue has caused some food waste projects to fail. He added that it is also hard to sort out which technology works best since new companies do not always share data with outside researchers.

Some companies find it better to use proven technology in new ways.

For example, Chicago-based Hazel Technologies has been selling a chemical compound, called 1-MCP, that is used in a room to slow the ripening process in fruit. The company now sells packets that can slowly release 1-MCP into small containers of fruits.

Mike Mazie oversees BelleHarvest, a large apple packing facility in Belding, Michigan. He ordered around 3,000 of the packets this year to use for apples that could not fit inside rooms treated with the compound.

"If you can get another week out of a bushel of apples, why wouldn't you?" he said. "It absolutely makes a difference.

The science is promising, but it is only part of the solution, said Yvette Cabrera. She is the director of food waste for the Natural Resources Defense Council.

Most food waste happens at home, she said. Reducing food sizes, buying smaller quantities, or improving the accuracy of freshness date could have even more effects than new technology.

"Overall as a society, we don't value food as it should be valued," Cabrera said.

Dee-Ann Durbin reported on this story for the Associated Press. John Russell adapted it for VOA Learning English.

ripen – v. to become ripe and ready to eat

crisp – adj. pleasantly firm and making a sharp sound when chewed or crushed

pack – v. to put (something) into a box or other container so that it can be moved, stored, or protected