Update Required To play the media you will need to either update your browser to a recent version or update your Flash plugin.
By Hai Do
28 August, 2019


A disease that threatens the world's most popular fruit – the banana – has arrived in Latin America. As a result, officials in Colombia have declared a state of emergency.

Bananas are among the most important food crops in the world, along with wheat, rice and corn. That information comes from the United Nations (UN).

Five years ago, the UN warned that a disease called Tropical Race 4, or TR4, could destroy "much of the world's banana crop." The disease first appeared in Asia in the 1990s. It later spread to Africa and the Middle East.

There are as many as 1,000 kinds of bananas grown in more than 150 countries. The TR4 disease only affects the most popular and common kind of banana – the Cavendish.

It is easier and more cost-effective for growers to produce just one kind of banana. Growers in Colombia and many other places choose Cavendish bananas. This variety can be shipped to countries around the world without ripening too quickly. 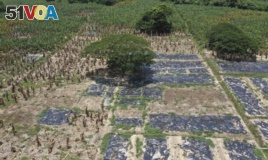 Black, plastic sheets cover a banana plantation hit by a disease that ravages the crops on a plantation near Riohacha, Colombia, Thursday, Aug. 22, 2019. (AP Photo/Manuel Rueda)

Banana industry watchers say there is still time to find another kind of banana to grow.

Not that long ago, the Gros Michel, also known as Big Mike, was the world's most popular banana. Big Mike was destroyed in the 1960s by the same disease that is now threatening Cavendish.

Randy Ploetz is a retired scientist from the University of Florida. He studied tropical plant diseases. He said of the recent spread of TR4, "I don't think it's going to impact the availability of the Cavendish in supermarkets anytime soon."

He added that Asian countries affected by the TR4 disease have planted different kinds of Cavendish or moved to uninfected farmlands. But those bananas are not as productive, and they later become infected, too.

In Colombia, officials are taking special measures to stop the disease from spreading.

Officials have removed plants infected with the disease and covered soil with black plastic sheets to prevent spread of the disease. Officials have also set up controls at entrances to affected banana farms where they disinfect the trucks that travel between the farms and ports. The country's military and police are also guarding banana farms to keep thieves from spreading the disease through their clothes and shoes.

So far, the disease has been found on six farms near Colombia's border with Venezuela. Officials say the affected area is still small and is not hurting the country's banana exports.

Colombia's agriculture minister, Andres Valencia, told the Associated Press, "We will continue to work towards stopping this disease from spreading to the rest of Colombia." He said growers will one day have to plant other kinds of bananas that are more disease resistant.

Gert Kema is a plant scientist who studies bananas. He agrees that the banana industry needs to diversify. He says there are many types of tomatoes and peppers grown around the world, for example. Bananas should be no different.

Hai Do adapted this story for Learning English based on Associated Press news reports. Ashley Thompson was the editor.

impact - v. have a strong and often bad effect

diversify - v. to increase the variety of goods or services