Update Required To play the media you will need to either update your browser to a recent version or update your Flash plugin.
By Bryan Lynn
09 April, 2018


Facebook says it will begin informing users as to whether their personal data may have been wrongly shared with a British research company.

Beginning Monday, Facebook said users who may have had private data shared with Cambridge Analytica will receive a message about it in their News Feed.

The company believes up to 87 million people might be have been affected. Facebook says most of them are in the United States. It says there were about a million users affected each in the Philippines, Indonesia and Britain.

Facebook says the information Cambridge Analytica got was first collected by a researcher at Cambridge University. The researcher gathered the data in 2013 through an app that asked users a series of questions for what was described as a personality test. 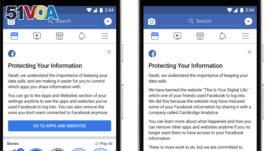 Facebook is informing users who may have had private data shared with Cambridge Analytica through a message in their News Feed. (Facebook)

Last week, Facebook founder Mark Zuckerberg admitted the company made mistakes in dealing with Cambridge Analytica. The company says it is continuing to investigate the incident. Zuckerberg apologized and said the social media service is already taking steps to prevent misuse of user data in the future.

Facebook has also created a link that shows all users what apps and websites they used Facebook to sign into. From the link, users can remove ones they no longer want connected to Facebook.

Cambridge Analytica uses a research method that involves "psychographs." The method aims to use data it collects to predict personal behaviors.

Zuckerberg has been called to testify before several Congressional committees beginning on Tuesday. He is expected to speak about the Cambridge Analytica situation and discuss Facebook's privacy policies.

Bryan Lynn wrote this story for VOA Learning English, based on information from Facebook and reports from the Associated Press and Reuters. Caty Weaver was the editor.

Do you think Facebook is handling the situation with Cambridge Analytica correctly? Write to us in the Comments section, and visit 51VOA.COM.

personality – n. set of emotional qualities, ways of behaving, etc., that makes a person different from other people