Update Required To play the media you will need to either update your browser to a recent version or update your Flash plugin.
By Hai Do
15 August 2022


Officials in San Francisco are asking the public to help choose a waste container among several models proposed for mass deployment in the California city.

It is proving to be a costly project. One of the trash cans under consideration cost more than $20,000 and took four years to make.

San Francisco began its search for the perfect public trash can in 2018. Officials decided it was time to replace the more than 3,000 cans that have served the city's streets for almost 20 years. 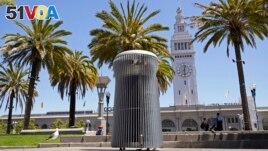 A made-to-order trash can called Salt and Pepper is seen near the Embarcadero and Ferry Building in San Francisco on July 26, 2022. Could it take years to make and cost more than $20,000? (AP Photo/Eric Risberg)

The current trash cans open too widely, they say, permitting people to reach in. The cans also break a lot, requiring repairs. Sometimes people push them over or mark them with words and pictures. Sometimes, the cans are set on fire.

Last month, the city deployed 15 made-to-order trash cans and 11 off-the-shelf trash cans. Attached to each was a QR code from which people could answer questions about the individual can. The city government project also created interactive maps so people can find the different models to consider.

The so-called Soft Square model trash can was priced at $20,900, making it the costliest model on the streets. It is made of light steel. A press of a pedal opens the can for hands-free operation. It has dividers so waste can be separated from materials for recycling, like aluminum and glass.

Another model, called Slim Silhouette, came in at $18,800. It employs a steel design that makes it hard to mark with paint.

The lowest-priced of the specially-made models cost about $11,000.

City officials say, however, that the government will not pay more than three-thousand per can once a model is chosen for mass production.

Beth Rubenstein is a spokeswoman for San Francisco's Department of Public Works. "We live in a beautiful city, and we want (the trash can) to be functional and cost-effective, but it needs to be beautiful," she said.

But the good looks of the shiny new trash cans have not protected them from vandalism and other disrespect. Three weeks after being deployed, several are overflowing, or covered in orange and white graffiti or dirty from coffee spills.

Diane Torkelson volunteers on a team that removes trash from the streets near her home. She recently visited three of the proposed trash cans. Two were already full when the group arrived to inspect them, she said.

"If the trash can is full, it's of no use, no matter how well it was designed," she said.

Olga Rodriguez reported this story for The Associated Press. Hai Do adapted the story for Learning English.

made-to-order - phrase, designed specifically to meet a set of requirements

off-the shelf - phrase, not made to order but taken from existing supplies

vandalism - n. the act of intentionally destroying or damaging property

graffiti - n. pictures, words that are painted or drawn on wall, building, etc.