Update Required To play the media you will need to either update your browser to a recent version or update your Flash plugin.
By John Russell
02 December, 2019


An apple tree stands alone near the top of a hill. It produces the Arkansas Beauty, a fruit long believed to have disappeared from existence. Three years ago, plant experts E.J. Brandt and David Benscoter rediscovered it.

The men have found 13 long-lost apple varieties in an area once known as Oregon Territory in the northwestern United States.

Brandt and Benscoter, both retirees, lead a nonprofit called Lost Apple Project. They travel hundreds of kilometers in trucks and on foot to find orchards planted by settlers more than a century ago. 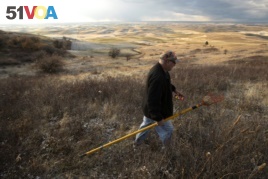 In this Oct. 28, 2019, photo, amateur botanist David Benscoter, of The Lost Apple Project, walks above an orchard in the Steptoe Butte area near Colfax, Wash. Benscoter and fellow botanist E.J. Brandt have rediscovered at least 13 long-lost apple varieties over the past several years in homestead orchards, remote canyons and windswept fields in eastern Washington and northern Idaho. (AP Photo/Ted S. Warren)

The two are racing against time to keep the fruit from disappearing. The apple trees are old, and many are dying. Others are being ripped out for more wheat fields or housing developments.

"To me, this area is a goldmine," said Brandt, who has found two historical varieties in the state of Idaho. "I don't want it lost in time. I want to give back to the people so that they can enjoy what our forefathers did."

North America once had 17,000 named varieties of domesticated apples, but only about 4,000 remain. The Lost Apple Project believes settlers planted a few hundred varieties in their part of the Pacific Northwest alone.

The Homestead Act of 1862 gave 65 hectares to families who would improve the land and pay a small fee. These people planted orchards with enough variety to get them through the long winter. They planted apples that ripen from early spring until the first freeze.

Then, as now, people did not raise apples from seeds. People took cuttings taken from existing trees and then joined them with roots. The new trees do not have the genetic material that often makes "wild" apples unfit as food.

Joanie Cooper is a plant scientist at the Temperate Orchard Conservancy. She has helped identify many of the lost varieties found in northern Idaho and eastern Washington. The trees have value beyond their historic importance, she notes.

The trees could help genetic diversity among modern-day apple crops as climate change and disease take an increasing toll.

Cooper said, "You have to have varieties that can last, that can grow, produce fruit, survive the heat and maybe survive the cold winter, depending on where you are. I think that's critical."

Gillian Flaccus reported this story for the Associated Press. John Russell adapted it for Learning English. Caty Weaver was the editor.

forefather – n. a person from an earlier time who helped to create or start something modern or important

domesticated – adj. from the verb

domesticate - v. to grow (a plant) for human use ; to breed or train (an animal) to need and accept the care of human beings : to tame (an animal)

ripen – v. to become ripe and ready to eat