Update Required To play the media you will need to either update your browser to a recent version or update your Flash plugin.
By VOA
30 April, 2015


Police in Baltimore, Maryland, have completed their investigation into the death of a young black man in police detention. He died April 19 of a spinal cord injury he suffered on April 12 when he was detained. Freddie Gray's death led to rioting in the city earlier this week.

Police gave their report to prosecutors. They will decide whether to charge six police officers involved in Mr. Gray's arrest. All six have been suspended, with pay, during the investigation. 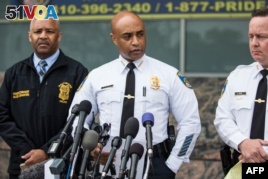 A Pakistani court has sentenced 10 men to life in prison for the 2012 shooting of a 15-year-old education activist.

Malala Yousufzai was attacked on a school bus in Pakistan's Swat Valley. Two of the men sentenced Thursday were present during the attack. The others helped plan it. The ten men will spend at least 25 years in jail.

The Pakistani Taliban group claimed responsibility for the attack. It threatened to target Malala again if she ever returned to Pakistan. The 17-year-old Nobel peace prize winner now lives in Britain.

The Nigerian army says it has freed another 150 people who were held by the militant group Boko Haram.

An army official told VOA that troops rescued about 100 children and 50 women on Wednesday in the Sambisa Forest in northeastern Nigeria.

The large forest holds many Boko Haram camps. It is believed to be the place where the group took many of the thousands of Nigerians it kidnapped over the past few years.

The army said it also freed 200 girls and 93 women from the forest on Tuesday. Reporters have not yet seen the women and girls, and the military has released no photos of them.

Mr. Sanders is 73 years old and the longest-serving independent in congressional history. He is a self-described democratic socialist.

Mr. Sanders announced Thursday at the U.S. Capitol that he will compete in the Democratic Party primary. He said that his campaign will center on the issue of income inequality.

A 15-year-old boy was pulled out alive from the ruins of a hotel in Kathmandu on Thursday. A powerful earthquake shook Nepal five days earlier, killing almost 5,500 people.

Nepal's Armed Police Force rescued the boy. He is resting in a hospital. A doctor who treated him said he is expected to make a good recovery.

Hundreds of people nearby the rescue cheered when they saw the teenager was alive.

prosecutor - n. a lawyer who represents the side in a court case that accuses a person of a crime and who tries to prove that the person is guilty

independent - n. a person who does not belong to a political party

primary - n. an election in which members of the same political party run against each other for the chance to be in a larger and more important election