Indian officials are blaming extremely hot weather for more than 2,000 deaths in the country. The extreme heat has been a problem for nearly two weeks across large parts of India. The severe heat wave is the second-deadliest in the country's history. It also is the fifth-deadliest heat wave ever reported.

Indian officials are being urged to take action to protect people from the extreme temperatures, which have risen 15 to 20 degrees Celsius in a short time. In many places, the temperature is about 45 degrees. 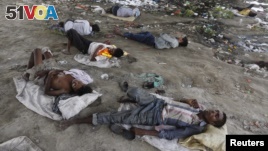 People sleep on the Yamuna river bed under a railway bridge during a hot summer day in the old quarter of Delhi, India, May 31, 2015. Parts of India have experienced 46 degrees Celsius for seven straight days. (REUTERS/Adnan Abidi)

Many people are hoping seasonal monsoon rains will arrive soon to cool the country.

The United States Senate has agreed to begin debate on a bill to reform how the nation fights terrorism. The bill would give private communications companies the duty to collect phone records. Up until now, the National Security Agency had that responsibility. Some senators and others said they no longer trusted the agency to gather the information. Last month, a federal appeals court said the NSA collection program was illegal.

The bill to give collection powers to private companies won approval in the House of Representatives. But it was not as popular in the Senate.

Senate Majority Leader Mitch McConnell had asked the Senate to temporarily give the NSA permission to continue collecting phone records. But on Sunday he admitted that not enough senators would let the agency do that. He then said letting private companies collect the records is better than nothing at all.

The senator said the nation is dealing with what he called "growing, aggressive and sophisticated threats."

A U.S. official says Qatar has agreed to temporarily extend travel and other restrictions on five top Taliban members. The five men were released last year from the U.S. prison at Guantanamo Bay, Cuba in exchange for a captured American soldier.

The year-long restrictions on the five were to end Monday.

Last year, Qatar agreed to let the five men stay in the country as part of an agreement to free U.S. Army Sergeant Bowe Bergdahl. The Taliban in Afghanistan had held the soldier for five years after he left from his Army position. He has now been charged with illegally leaving his post.

Kerry to Return to US After Breaking Leg in Bike Accident

The accident happened in France on Sunday.

Mr. Kerry will be treated in Boston, Massachusetts. The injury is near the area on his body where doctors had earlier performed hip surgery. A spokesperson says he will be treated by the same doctor who performed that operation.

Mr. Kerry was in Switzerland for talks with Iranian Foreign Minister Mohammad Javad Zarif. They were negotiating an agreement on limiting Iranian nuclear activities.

Mr. Kerry was then to travel to Spain and then on to Paris for a conference on fighting the Islamic State group.