Update Required To play the media you will need to either update your browser to a recent version or update your Flash plugin.
By Bryan Lynn
28 December 2022


Throughout the past year, we followed some interesting new inventions in the field of artificial intelligence (AI). Here is a look back at five notable AI developments in 2022.

Facebook's parent Meta said it had built a technology tool designed to directly translate spoken speech from one language to another. 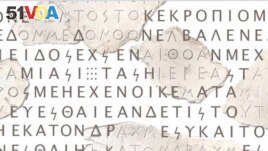 This image of an ancient Greek text represents a restoration of the inscription by the Ithaca tool, developed by Alphabet's DeepMind, along with researchers from the University of Oxford, Ca' Foscari University of Venice and Athens University of Economics

The AI-powered tool was built to translate between English and the Hokkien language. The company said the project required unusual development methods. This is because Hokkien is mainly a spoken language and does not have a widely used written form.

Meta said it aims to use the same methods used for Hokkien to create speech-to-speech translation systems for many more languages in the future.

The system works by measuring a person's breathing patterns during sleep. A study describing the method said it can also measure the severity of disease and record its progression.

The researchers noted that early signs of Parkinson's disease are not easy to discover. Many signs, or symptoms, only appear years after the disease sets in.

But the team said its experiments showed that with just one night of sleep, the AI system was able to correctly identify Parkinson's up to 86 percent of the time. With 12 nights of data, the rate went up to 95 percent.

Researchers announced they had created a technology tool that uses pig sounds to interpret different emotions.

The tool is based on thousands of recordings collected from more than 400 pigs throughout their lives. The scientists developed an AI-driven algorithm to identify a series of emotions the animals could be experiencing.

The study centered on more than 7,000 audio recordings of pigs in different situations. By training the algorithm to recognize the sounds in both good and bad situations, the team said the tool was able to identify the correct emotion 92 percent of the time.

Researchers said the tool is expected to lead to further systems farmers can use to improve the productivity and well-being of their animals.

System to identify and predict smells

Developers said they had created a technology tool that can identify and re-create different smells.

The scientists built on past research to produce a brain-like technology model to create a "principal odor map" to identify molecules related to smells. The team said such a system can be used across many different fields, including the healthcare, food and fragrance industries.

The researchers reported that the tool can be used to help fight one of the world's biggest health problems – diseases spread through insects. They said the system can measure how effective a molecule is at keeping mosquitos away from humans.

Tool to fill in missing words in ancient writings

Researchers said they developed an AI system to help fill in missing words in ancient writings. The tool, called Ithaca, is designed to help historians repair the writings and identify when and where they were written.

Researchers – led by Alphabet's AI company DeepMind – created the tool. They said the system is "the first deep neural network" to identify missing text in damaged writings, or inscriptions.

The team said that when historians work on their own, the success rate for repairing damaged inscriptions is about 25 percent. But when humans teamed up with Ithaca to assist in their work, the success rate jumped to 72 percent.

translate – v. to change from one language to another

encode – v. to use a word or phrase in a foreign language in the correct way

interpret – v. to explain or decide what something means

odor – n. a smell, often one that is unpleasant