Update Required To play the media you will need to either update your browser to a recent version or update your Flash plugin.
By Bryan Lynn
22 December 2022


Officials in the Indian city of Hyderabad say police there depend on facial recognition technology to fight crime.

Hyderabad is the capital of India's south-central state of Telangana. In 2013, Islamic terrorists exploded bombs at a market there, killing 19 people and wounding more than 100 others.

The city hurried to establish a network of surveillance cameras. Today, more than 700,000 cameras are active on the streets. 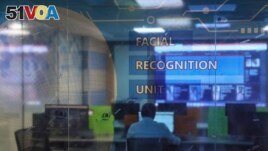 Employees work at the Facial Recognition Unit at the Hyderabad Police Headquarters in Hyderabad, India. (AP Photo/Mahesh Kumar A.)

The center for Hyderabad's facial recognition operations is the newly built Command and Control Center. Workers at the center have the ability to continuously examine data collected by cameras and cell phone transmitters.

The system can pull up images from any available camera across the city. It then uses artificial intelligence (AI) methods to try to identify known criminals in the area.

The use of facial recognition and AI have been increasing in India in recent years. Police have used both technologies to watch large gatherings in an effort to identify criminals.

In addition to using the technologies to fight serious crimes, officials in Hyderabad have also approved their use for issuing traffic violations and enforcing COVID-19 rules.

Critics of the system say it can result in mistaken identities and violate the privacy of citizens. Anand said photos of traffic violators and pandemic restrictions violators are kept temporarily unless needed for use in court. Then, the images are supposed to be destroyed. He expressed surprise that any citizen would object to the system.

"If we need to control crime, we need to have surveillance," Anand said.

Critics raised concerns about the technology in January after a Hyderabad official gave a demonstration of how it was designed to work. The official put an image of a female reporter's face into the system. Within seconds, the tool returned five possible criminal matches from the state's records. Three of the possible matches were men.

Hyderabad has spent hundreds of millions of dollars on police vehicles, surveillance cameras, facial recognition tools and other crime-fighting technologies. Anand says the investment has helped the state bring in more private and foreign investment. This includes a development center completed by Apple in 2016 and a major Microsoft data center announced in March.

"When these companies decide to invest in a city, they first look at the law-and-order situation," Anand said.

He credited such technologies for drops in crime across the state. Muggings to steal jewelry, for example, fell from 1,033 incidents a year to fewer than 50 a year after cameras and other technologies were deployed, Anand said.

India's National Crime Records Bureau is also seeking to build what could be among the world's largest facial recognition systems. The plans are in line with the administration of Indian Prime Minister Narendra Modi, who has pushed for increased information technology development across the national government.

The government has called for smart policing methods using drones, AI-powered surveillance cameras and facial recognition. The technologies have received wide support across political parties and have already begun to expand to states across India, said Apar Gupta. He is head of the New Delhi-based Internet Freedom Foundation.

"There is a lot of social and civic support for it too – people don't always fully understand," Gupta said. "They see technology and think this is the answer."

surveillance – n. the careful watching of a person or place

transmitter – n. a large piece of equipment used to broadcast signals through the air

match – n. two things that are very similar or the same as each other

mugging – n. an attack in a public place in which money, etc. is stolen from someone