Update Required To play the media you will need to either update your browser to a recent version or update your Flash plugin.
By John Russell
26 September 2022


Iraqi artist Khaled Al-Abadi's dream is to recreate historical objects that were damaged during years of war.

Al-Abadi is a sculptor. In his Mosul workshop, he carefully shapes objects into pieces of art -- lions, chariots, birds, and more.

Al-Abadi told the Reuters news agency, "During the Islamic State period, when my colleague and I were walking around, we would see the statues that were removed, and the gates that were being demolished, we were really troubled by this." Demolished is a term that means destroyed. 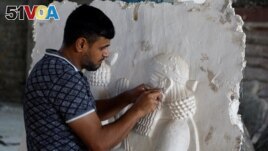 The sculptor Khaled al-Abadi works inside his workshop on his sculptures which depict scenes from the history of the city of Mosul, in Mosul, Iraq, September 15, 2022. (REUTERS/Khalid al-Mousily)

The area where about 20 murals are displayed is located in old Mosul, a part of the city that suffered heavy damage during the war to take back the city from Islamic State militants. These militants destroyed many of its ancient sites.

The country's rich cultural history has long suffered during its conflicts. Last year, ancient objects stolen and taken out of Iraq after the U.S. invasion in 2003 were put on display in Baghdad.

One of the objects on display included a 3,500-year-old clay tablet with part of the Epic of Gilgamesh, the ancient Sumerian story believed to be one of the world's first written works.

Charlotte Bruneau reported on this story for Reuters. John Russell adapted it for VOA Learning English.

chariot – n. a carriage with two wheels that was pulled by horses and was raced and used in battle in ancient times

colleague – n. a person who works with you : a fellow worker

tablet – n. a flat piece of stone, clay, or wood that has writing on it