Update Required To play the media you will need to either update your browser to a recent version or update your Flash plugin.
By Faith Pirlo
29 August 2022


Singer Taylor Swift received the top honor at the yearly MTV Video Music Awards (VMAs) on Sunday at the Prudential Center in the state of New Jersey.

Swift won the award for Music Video of the Year, her 14th VMA in her career so far. MTV is a well-known music video television channel.

She accepted the award for the 10-minute-long re-recorded version of her 2012 song All Too Well about a romantic breakup. 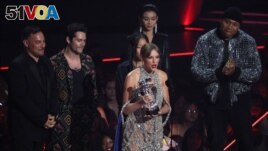 Taylor Swift accepts the award for Video of the Year for "All Too Well" at the 2022 MTV Video Music Awards at the Prudential Center in Newark, New Jersey, U.S., August 28, 2022. (REUTERS/Brendan McDermid)

At the award ceremony, Swift thanked her fans, called "Swifties."

She said, "We wouldn't have been able to make this short film if it weren't for you, the fans."

She added that she would not have been able to re-record her albums without their support either. Recently, she re-recorded two albums, Fearless and Red, after a disagreement with her former record company.

Taylor commented that, for the first time in the award show's history, four of the video directors nominated for Video of The Year are women.

Swift also announced that her new album would be released on October 21.

Later, she posted on social media that the new album called Midnights will include music that she wrote during 13 nights throughout her life when she could not fall asleep.

The VMAs also showed the Puerto Rican artist Bad Bunny while he was giving a sold-out performance at New York's Yankee Stadium. He won the award for Artist of the Year.

Other winners include Dove Cameron for Best New Artist and Harry Styles who received the Album of the Year award for Harry's House.

Nicki Minaj won the Video Vangaurd Award for her influence on popular music. Minaj then performed a combination of some of her most popular songs like Anaconda and Super Bass. She also honored artists who inspired her.

"I wish that Whitney Houston and Michael Jackson were here. I wish that people understood what they meant, what they were going through (and) took mental health seriously."

sold-out – adj. of or relating to an event where all the tickets have been sold

inspire — v. to make want to do something ; to give an idea about what to do or create

plus-size – adj. relating to a larger size of clothes