Update Required To play the media you will need to either update your browser to a recent version or update your Flash plugin.
By John Russell
25 September 2022


A new show at the Victoria and Albert Museum in London explores South Korean popular culture and its rise to international fame.

Among the things to see at Hallyu! The Korean Wave are K-Pop costumes, K-drama props as well as a copy of a set from the Academy Award-winning film Parasite.

Rosalie Kim is the curator, or organizer of the show. She told Reuters news agency that the exhibition celebrates the colorful popular culture of South Korea from its beginnings to its place on the international stage. 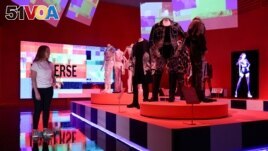 A gallery assistant looks at "K-pop - exporting hallyu to the world" during the press view of "Hallyu! The Korean Wave" exhibition at the V&A in London, Britain, September 21, 2022. (REUTERS/Tom Nicholson)

"'Hallyu' ... means Korean wave and it refers to this ... rise of popular culture from South Korea that has taken the world by storm in the past few decades, " Kim said.

The exhibition is divided into parts including K-pop and its fans, television drama and film, as well as fashion and beauty.

The pink clothing that singer Psy wore in the music video for his 2012 hit Gangnam Style welcomes visitors to the exhibition.

Other clothing on show includes colorful designer creations as well as costumes worn by G-Dragon and K-pop groups ATEEZ and Aespa.

From the world of television, there are costumes from historical dramas as well as clothing from Squid Game.

The Victoria and Albert Museum worked closely with the production designer of Parasite, Lee Ha-jun, to reproduce his set.

Other objects to see include pictures, music album covers and long signs called banners that were made by K-pop fans. Visitors can also take part in a K-pop dance competition.

Hallyu! The Korean Wave opened Saturday and runs until June.

Marie-Louise Gumuchian reported on this story for Reuters. John Russell adapted it for VOA Learning English.

refer to– phrasal verb : to have a direct connection or relationship to (something)

banner – n. a large strip of cloth with a design, picture, or writing on it