Update Required To play the media you will need to either update your browser to a recent version or update your Flash plugin.
By VOA
18 December, 2015


The United States says it is concerned about the Islamic State group attracting recruits and acquiring resources in North Africa.

The forces fighting against IS in Syria and Iraq are retaking ground and oil fields.

While this is seen as a success, one U.S. government official says there is concern about recruits coming from Libya and parts of Egypt. 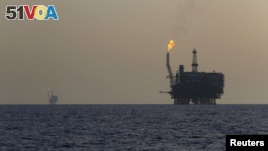 Offshore oil platforms are seen at the Bouri Oil Field off the coast of Libya August 3, 2015. Oil prices lurched 5 percent lower on Monday to their lowest since January, taking global benchmark Brent below $50 a barrel as weak factory activity in China deepened a commodity-wide rout. REUTERS/Darrin Zammit Lupi)

Anti-IS fighters in the northern part of Iraq are taking back territory and oil revenue. So IS looks for new sources of income.

Iraq's largest refinery was taken back from IS in October.

President Barack Obama says IS has lost 40 percent of the area it once controlled in Iraq.

In Syria, IS controls about 80 percent of the oil fields. But one U.S. official says production is slow and the group is not earning as much money from oil as it once did.

Oil refineries and transport trucks are targets, and oil prices are down by about half since 2014.

One U.S. official says IS is "looking at the oil assets in Libya and elsewhere. But we'll be prepared."

Libya's oil industry has suffered since the country's civil war started in 2011.

That makes Libya a potential recruiting ground for IS.

One defense official says "Libya is the next big thing for ISIL."

Do you think North Africa is the next recruiting ground for IS? We want to hear from you. Write to us in the Comments section or on 51VOA.COM.

recruit – n. a person who has recently joined a company, an organization, the armed forces, etc.