Update Required To play the media you will need to either update your browser to a recent version or update your Flash plugin.
By John Russell
19 November 2022


In two areas in the occupied West Bank, Israel has put in robotic weapons that can fire tear gas, stun grenades, and sponge-tipped bullets at Palestinian protesters.

The weapons, located in the Al-Aroub refugee camp and the city of Hebron, use artificial intelligence to follow targets. Israel says the technology saves lives — both Israeli and Palestinian. But critics see moral or ethical problems with such weapons systems. 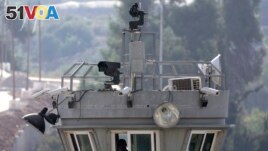 The robotic weapons systems come at a time of increased tensions in the occupied West Bank. Unrest has risen there during what has been the deadliest year since 2006.

The victory by former Prime Minister Benjamin Netanyahu's alliance, which includes a party with close ties to the settler movement, has raised concerns of more violence.

One of the weapon systems is located on a guard tower overlooking the Al-Aroub refugee camp in the southern West Bank. Witnesses say that when young Palestinian protesters enter the streets throwing stones and firebombs at Israeli soldiers, the weapons shoot tear gas or sponge-tipped bullets at them.

About a month ago, the military also placed the robots in the nearby city of Hebron, where soldiers often clash with stone-throwing Palestinians. The army declined to comment on its plans to deploy the system elsewhere in the West Bank.

Palestinian activist Issa Amro said Hebron residents fear the new weapon might be misused or hacked. He added that people also do not like what they say is a weapons test on civilians.

"We are not a training and simulation for Israeli companies," he said. "This is something new that must be stopped."

There are no soldiers next to the machines. Instead, the weapons are operated by remote control. At the touch of a button, soldiers inside a guard tower can fire at selected targets.

The army says the system is under testing and fires only "non-lethal" weapons used for crowd control, such as sponge-tipped bullets and tear gas.

Robotic weapons are increasingly common around the world. Militaries use drones to carry out lethal strikes in places like Ukraine and Ethiopia. Remote-controlled guns like the Israeli system in the West Bank have been used by the United States in Iraq, by South Korea along the border with North Korea, and by Syrian rebel groups.

Israel, known for its advanced military technologies, is among the world's top producers of drones capable of launching precision-guided missiles. It has built a fence along its border with the Gaza Strip equipped with radar and underground and underwater sensors. Above ground, it uses a robotic vehicle, equipped with cameras and machine guns, to patrol borders.

"Israel is using technology as a means to control the civil population," said Dror Sadot, spokeswoman for Israeli rights group B'Tselem. She said that even supposedly non-lethal weapons like sponge bullets can cause extreme pain and even be deadly.

The system in Al-Aroub was built by Smart Shooter, a company that makes "fire control systems" that it says "increase the accuracy, lethality, and situational awareness of small arms." The company has deals with many militaries around the world, including the U.S. Army.

"They always have a man ... making the decision regarding the legitimate target," she said.

She said the system reduces injuries and deaths by distancing soldiers from violence and by making shots more accurate.

But Omar Shakir, the Israel and Palestine Director at Human Rights Watch, said Israel is on a "slide toward the digital dehumanization of weapons systems." By using such technologies, Shakir said Israel is creating "a powder keg for human rights abuse." A powder keg is a situation that is likely to become dangerous or violent.

In Al-Aroub, residents say the machines fire without warning.

"It is very fast, even faster than the soldiers," said Kamel Abu Hishesh, a 19-year-old student. He described almost nightly clashes where soldiers enter the camp as the automated gun fires tear gas.

Paul Scharre of the Center for a New American Security is a former U.S. Army shooting expert. He said that without emotion and with a better aim, automated systems can possibly reduce violence.

But he said the absence of international rules for "killer robots" is a problem. Otherwise, he said, it is only a matter of time before these weapons systems are equipped to use deadly force.

Sam McNeil reported on this story for the Associated Press. John Russell adapted it for VOA Learning English.

sponge-tipped bullet – n. a kind of projectile that limits breaking or penetration of the skin

hack – v. computers : to secretly get access to the files on a computer or network in order to get information, cause damage, etc.

precision -- n. the quality of being precise : exactness or accuracy

legitimate – adj. allowed according to rules or laws; real, accepted, or official

slide – n. a movement to a lower or worse state or condition

automated – adj. : to run or operate (something, such as a factory or system) by using machines, computers, etc., instead of people