NATO: Missile that Killed Two in Poland Was Accidental

Update Required To play the media you will need to either update your browser to a recent version or update your Flash plugin.
By Dan Friedell
16 November 2022


A missile from the war between Russia and Ukraine landed in Poland and killed two people on Tuesday.

NATO and the president of Poland said Wednesday the strike was accidental. They said Ukrainian forces likely launched the missile.

The army was using its anti-missile defense systems against a major Russian air attack at the time Poland was hit. 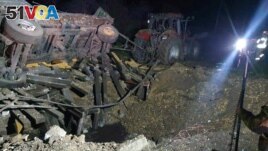 A view shows damages after an explosion in Przewodow, a village in eastern Poland near the border with Ukraine. The image, obtained from social media and verified by Reuters, was released on November 15, 2022 via REUTERS.

"It is highly probable that one of these missiles unfortunately fell on Polish territory," said Polish President Andrzej Duda. "There is nothing, absolutely nothing, to suggest that it was an intentional attack on Poland."

NATO leader Jens Stoltenberg agreed, saying it was not "the result of a deliberate attack."

The words eased tensions that rose on Tuesday when it appeared Russia may have fired the missile into Poland, a NATO country. Stoltenberg said Wednesday, however, that Russia is to blame even if the missile came from Ukraine.

"This is not Ukraine's fault. Russia bears ultimate responsibility."

The war began when Russia invaded Ukraine in February of this year.

Ukrainian President Volodymyr Zelenskyy is disputing the reports that the missile came from Ukraine and has demanded evidence. He told reporters that Ukraine's top commanders were sure, in Zelenskyy's words, "that it wasn't our missile or our missile strike."

Ukrainian officials should have access to the site and take part in the investigation, he added.

If Ukrainian defenses, he said, "killed a person, these people, then we need to apologize. We are honest people after all."

Earlier, U.S. President Joe Biden said it was "unlikely" that Russia fired the missile. But, "I'm going to make sure we find out exactly what happened," he added.

Biden spoke in Indonesia where he is attending the Group of 20 meeting.

Russia's attack on power generation centers and systems Tuesday included Ukraine's western area bordering Poland. Ukraine's military said 77 of the more than 90 missiles fired were brought down by air defenses, along with 11 drones.

The missile in question hit a town in eastern Poland.

"The sound was terrifying," said Ewa Byra, a school director there. She said she knew both men who were killed — one was the husband of a school employee, the other the father of a former student.

Russia said Tuesday none of its missiles were any closer than 21 kilometers from the border with Poland. It also praised Biden's "restrained" comments about the news.

Dan Friedell adapted this story for VOA Learning English based on a reports by the Associated Press and Reuters.

unfortunate –adj. not appropriate or desirable

deliberate –adj. something that happens because of a plan

ultimate –adj. coming at the end of a process

access –n. a way of getting near to something