Update Required To play the media you will need to either update your browser to a recent version or update your Flash plugin.
By Hai Do
31 May 2022


Texting is a very popular way to communicate with people on wireless phones. But, for first lady Jill Biden and her husband, the president, the activity is often known as "fexting."

Jill Biden told Harper's Bazaar magazine recently that when Joe Biden was vice president, the couple would settle their arguments over text so their security guards would not have to hear them fight. As a result, fighting and texting became fexting.

But, now Joe Biden is president. And that made fexting a little different, Jill Biden learned. She told Harper's that when she recently fexted in a fit of anger, her husband answered with this: 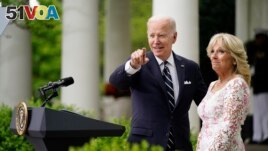 "You realize that's going to go down in history. There will be a record of that."

The law requires that all presidential communications be saved for historical record. Jill Biden told Harper's, "I won't tell you what I called him that time."

The first lady appears on the cover of the publication's June-July issue. Harper's Bazaar said it is the first time in its 155-year history that a U.S. first lady is the cover story.

Jill Biden was 18 when she married her first husband. But by her mid-20s, the marriage was over and she was independent for the first time in her life. The failure of her marriage, she said, was difficult. She needed a place to live but did not want to move back home with her parents.

So, Biden finished college and became a teacher.

"I knew I would never, ever put myself in that position again, where I didn't feel like I had the finances to be on my own, that I had to get the money through a divorce settlement," she said.

"I drummed that into (my daughter), Ashley, ‘Be independent, be independent.' And my granddaughters," she said. "You have to be able to stand on your own two feet."

Jill Biden met Joe Biden in 1975, when he was serving in the U..S. Senate representing Delaware. They were married two years later. She kept teaching as Joe Biden was elected vice president and then president.

Jill Biden is a professor at Northern Virginia Community College. She teaches two times a week.

Her granddaughter Naomi is engaged to be married. And the Bidens will host the wedding at the White House this November. Another granddaughter recently told the first lady that she received an internship in Washington, D.C. and would like to stay in the house for the summer.

"I'm going to be raising a teenager?" Jill Biden said.

Hai Do adapted this story for Learning English based on Associated Press news report and Harper's Bazaar.