Migrant Tells Story of Survival in Hot Truck in Texas

Update Required To play the media you will need to either update your browser to a recent version or update your Flash plugin.
By Dan Novak
05 July 2022


Yenifer Yulisa Cardona Tomás was one of the migrants found trapped in an abandoned trailer in very hot conditions in the U.S. state of Texas last week.

Simple advice from a friend to stay near the door may have saved her life. Fifty-three others died.

Cardona Tomás spoke to The Associated Press by telephone from her hospital bed on Monday. She is from Guatemala's capital and is 20 years old. She said it was already hot on June 27 when she entered the trailer on the Texas side of the U.S. border with Mexico where she had been waiting. 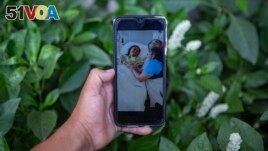 Mynor Cardona shows a photo on his cellphone of her daughter, Yenifer Yulisa Cardona Tom&#225;s, at the hospital while receiving a visit, in Guatemala City, Monday, July 4, 2022. (AP Photo/Oliver de Ros)

She said the smugglers took their cellphones and covered the trailer's floor with what she believes was powdered chicken seasoning. The seasoning was possibly used to hide people's smell from dogs used by law enforcement officials at the border. As she sat inside the crowded trailer with many others, the powder hurt her skin.

Cardona Tomás said a friend told her to stay near the door where it would be cooler. She shared the advice with another friend she had made during the trip.

"I told a friend that we shouldn't go to the back and should stay near (the entrance), in the same place without moving," said Cardona Tomás. She is being treated at a hospital in San Antonio. The friend survived, too.

As the truck moved on, it made stops to pick up more migrants. People also gathered near the door like Cardona Tomás. She had no way to know the time.

"The people were yelling, some cried. Mostly women were calling for it to stop and to open the doors because it was hot, that they couldn't breathe," she said.

The truck continued making additional stops. It was moving slowly just before she passed out. She woke up in the hospital.

She said the driver or someone else at the front of the truck yelled back that "we were about to arrive, that there were 20 minutes left, six minutes."

"People asked for water, some had run out, others carried some," she said.

The driver and three others were arrested and charged by U.S. officials.

Guatemala's Foreign Ministry has said that 20 Guatemalans died in the incident, 16 of whom have been identified.

Cardona Tomás said the truck was going to Houston, but she was headed to North Carolina.

Mynor Cordona is her father. He said Monday in Guatemala City that "she didn't have a job and asked me if I would support her" in migrating to the U.S. He said he knew of other cases of children who left without telling their families and ended up lost or dead.

He paid $4,000 for a smuggler to take her to the U.S. She left Guatemala on May 30, traveling in cars, buses and finally the trailer in Texas.

"I didn't know that she would travel in a trailer," he said. "She told us it would be by foot. It seems like at the last moment the smugglers decided to put (her) in the trailer, along with two more friends, who survived. One of them is still in critical condition."

Cordona had been communicating with his daughter up until the morning of June 27.

It was not until late that night that Cardona Tomás' family learned of the trailer. It was two more days before relatives in the United States confirmed that she was alive and in the hospital.

"We cried so much," Cordona said. "I even was thinking where we were going to have the wake and bury her. She is a miracle."

smuggler — n. a person who moves goods or people from one country to another secretly and illegally

powder — n. a substance made of very fine pieces like dust

seasoning — n. something added to food to improve its taste

passed out –v. to fall asleep or become unconscious

wake — n. a gathering to remember someone who has died

miracle — n. an unusual or wonderful event that is believed to be caused by the power of God