Update Required To play the media you will need to either update your browser to a recent version or update your Flash plugin.
By Faith Pirlo
07 August 2022


Florida's sea turtle population is changing because of hot weather.

Recent heat waves in the southern state have made the sand on the beaches so hot that almost of all the sea turtles born there are female.

When a mother sea turtle digs a nest for her eggs on the beach, the temperature of the sand decides the sex, or gender, of the baby sea turtles, called hatchlings. 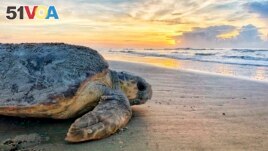 Bette Zirkelbach is the manager of the Turtle Hospital in the town of Marathon in the Florida Keys, an archipelago off the southern coast of the state.

She said that an Australian study showed a similar effect in which "99 percent of the new sea turtle babies are female," Zirkelbach said.

NOAA is the National Oceanic and Atmospheric Administration, the U.S. government weather agency.

NOAA's National Ocean Service website says the sex of sea turtles is not determined at the time of fertilization, but by the temperature of developing eggs.

Melissa Rosales Rodriguez is a sea turtle keeper at the turtle hospital at the Miami Zoo. She said, "Over the years, you're going to see a sharp decline in their population because we just don't have the genetic diversity. We don't have the male-to-female ratio needed in order to be able to have successful breeding sessions."

Both turtle hospitals have also been fighting turtle tumors. The tumors are called fibropapillomatosis, or FP. Among turtles, the tumors are contagious. They can be deadly for the animals if they are not treated.

Zirkelbach would like to save every turtle she can by opening up more turtle hospitals, especially since the future of the population is at risk from climate change and disease.

"The Turtle Hospital was the first. But, sadly and fortunately, there's a need all throughout Florida," she said.

archipelago – n. a group of islands

determine –v. to be the cause of something; to decide if something will be one way or another

fertilization – n. the action or process of fertilizing an egg

diversity – n. the condition or fact of being different

breeding – adj. the process by which young animals are produced by their parents

contagious - adj. transmissible by direct or indirect contact with an infected person

fortunately –adv. to say that it is lucky or good that something has happened