Update Required To play the media you will need to either update your browser to a recent version or update your Flash plugin.
By Pete Musto
03 August, 2017


North Korea still lacks the necessary technology to send a nuclear weapon all the way to the United States mainland, say experts.

But the same experts admit that North Korea's test of an intercontinental ballistic missile, or ICBM, last week marked an improvement in its military program.

The ICBM that North Korea tested on July 28 was the second long-distance rocket it launched in the month of July. The missile tested is called the Hwasong-14. Defense officials in the U.S. and South Korea said the military launched it from the Mupyong-ni arms factory in the country's north. 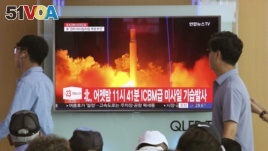 The missile traveled a distance of about 1,000 kilometers. But it reached an altitude of about 3,700 kilometers. It was in flight for about 45 minutes before falling into the sea. The missile crashed into the waters 175 kilometers from Hokkaido, Japan's second largest island.

Jonathan McDowell is an astrophysicist at the Harvard-Smithsonian Center for Astrophysics. He told VOA's Korean service that it appears North Korea has a fully operational ICBM. He said, "It seems to have worked as designed, and so that is a milestone in their missile development."

McDowell noted that the military did not launch the rocket into the atmosphere in a normal way in order to travel the greatest distance. If it had, the rocket's weapons system could have traveled further.

An earlier test on July 4 showed the furthest the Hwasong-14 could reach was between about 7,000 and 8,000 kilometers. This means it would have been able to reach Alaska.

Experts continue to debate how North Korea was able to improve the missile's performance. McDowell suggests that higher-powered engines driving the rocket during its second stage could have given it "a bit more push."

The technology that directs missiles back to earth after launching has been one of the biggest problems for North Korea. And many experts doubt that North Korea's military has perfected that technology.

The weapons systems must be able to survive the extreme heat and pressure generated from traveling through the atmosphere. If not, ICBMs armed with nuclear weapons will not reach their targets.

There are additional doubts about North Korea's missile technology. They come from video by the Japanese public news agency NHK. The video showed the Hwasong-14 possibly falling apart as it landed in the waters off Hokkaido.

Michael Elleman is a senior fellow for missile defense at The International Institute for Strategic Studies. He said that small, bright objects appeared to be falling off the missile as it returned to earth. This could be showing that the missile was breaking apart too soon.

Other experts, however, have suggested that the missile breaking apart may have been due to the steep angle of its flight path. The steep angle would have increased its speed and also its surface heat.

Elleman wrote on the website 38 North, which reports about North Korea:

"A reasonable conclusion, based on the video evidence, is that the Hwasong-14's re-entry vehicle did not survive during its second test."

He wrote that North Korea has more work to do before the country's leader Kim Jong Un has a missile able to strike the American mainland.

But McDowell notes that it will only take the country a few more years to reach the level of technology it desires.

Baik Sungwon and Jenny Lee reported this story for VOA. Pete Musto adapted it for Learning English. Mario Ritter was the editor.

We want to hear from you. How should the international community respond to North Korea continuing to seek nuclear weapons technology? Write to us in the Comments Section or on 51VOA.COM.

intercontinental – adj. able to travel from one continent to another

ballistic missile – n. a weapon that is shot through the sky over a great distance and then falls to the ground and explodes.

altitude – n. the height of something above the level of the sea

astrophysicist – n. someone who studies the physical and chemical properties and structures of stars, planets, and other objects in outer space

second stage – n. the point at which a rocket disconnects from its main engines and fires secondary engines

angle – n. the position from which something is approached