Update Required To play the media you will need to either update your browser to a recent version or update your Flash plugin.
By Mario Ritter
29 April, 2016


A North Korean court has sentenced a Korean-American man to 10 years of hard labor.

Kim Dong Chul was given the sentence on Friday after the court found him guilty on subversion charges.

Kim is a naturalized citizen of the United States. He admitted last month that he had attempted to steal North Korean military secrets. His confession took place in front of reporters in Pyongyang. He was arrested in October 2015. 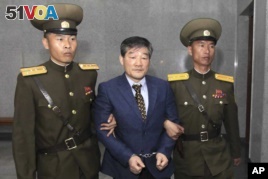 His confession came a week after a North Korean court sentenced Otto Warmbier, an American college student, to 15 years of hard labor. The court acted after Warmbier said he had attempted to steal a propaganda banner.

Observers note that North Korean officials likely pressured the confessions of both men.

Tensions between the United States and North Korea have risen in recent months because of the North's nuclear weapons and long-range rocket tests.

The U.S., South Korea and Japan have increased their defense readiness in response to the tests.

U.S. and South Korean forces held their yearly joint military exercises in March. Those exercises were described as the largest ever.

Also in March, the United Nations Security Council approved the strongest sanctions yet on North Korea for its nuclear and missile activities.

Fern Robinson reported this story for VOA News. Mario Ritter adapted it for Learning English. George Grow was the editor.

confession – n. a written or spoken statement in which a person admits to something, usually something wrong

sanctions – n. action is taken to force a country to obey international law