Update Required To play the media you will need to either update your browser to a recent version or update your Flash plugin.
By Bruce Alpert
20 December, 2016


Like other top officials in the administration of President Barack Obama, Education Secretary John King will leave government on January 20.

King gave a speech last week, talking about his hopes for education programs after Obama's term ends. He said Americans should continue to work for schools with students and teachers who represent America's different races, religions and ethnic groups.

"I am convinced that the growing conflicts in this country over race and religion and language would be profoundly reduced if our citizens were able to learn and play alongside classmates who were different from themselves," King said. 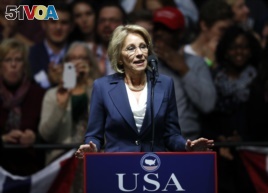 "Under her leadership we will reform the U.S. education system and break the bureaucracy that is holding our children back so that we can deliver world-class education and school choice to all families," Trump said.

DeVos is a supporter of charter schools. They are schools that can experiment more because they operate independently of local school boards. She also supports taxpayer money for vouchers that parents can use to pay for private school.

DeVos and other Republicans say vouchers allow parents in poor communities to move their children out of failing public schools. She has said they are likely to find a better learning environment in a good private school.

"As a general proposition, vouchers has not significantly improved the performance of kids that are in these poorest communities," Obama told Fox News in 2014.

In his speech, King said all sides should unite behind a simple goal: building a strong and fair public education system. He said the Education Department should continue to fight for better schools for all Americans.

DeVos has not said how she might change Obama's and King's education policies.

King and the Education Department also ordered stronger regulations of for-profit colleges. The department found some for-profit schools charged high fees, leaving students with large loans to pay off. In many cases, King said, students did not get a good education.

Some large for-profit schools have closed down because of the Obama administration's enforcement efforts.

It put out a statement from former U.S. House of Representatives Speaker Newt Gingrich, calling on the federal government to stop targeting for-profit colleges. Gingrich was an early supporter of Donald Trump's presidential campaign.

Instead of fighting for-profit colleges, Gingrich said the government should work with the schools to help Americans develop skills needed for good jobs and better pay.

DeVos is a wealthy Republican from the Midwestern state of Michigan. She is chair of the American Federation for Children. The group supports vouchers and charter schools.

The conservative Heritage Foundation praised the choice of DeVos as education secretary.

"Betsy DeVos has been a staunch supporter of more education choices for students and parents, and the school choice movement will have a champion in the Education Department," said the Heritage Foundation's Marguerite Bowling.

Randi Weingarten is the president of the American Federation of Teachers. He said the choice of DeVos meant that Trump does not support public education in the U.S.

"In nominating DeVos, Trump makes it loud and clear that his education policy will focus on privatizing, defunding and destroying public education in America," Weingarten said.

The Department of Education has 4,400 employees and a yearly budget of $68 billion.

vouchers - n. a document that gives you the right to get something such as a service without paying for it

proposition - n. something presented to a person or group of people to consider

significantly - adv. a way that is large or important enough to be noticed or have an effect

staunch - adj. very devoted or loyal to a person, belief, or cause

defunding - v. taking away money for a program