Melody Bales: 'The Lady From Haiti'

Update Required To play the media you will need to either update your browser to a recent version or update your Flash plugin.
By Marsha James
18 January, 2017


There is a colorful Caribbean Art Gallery and gift boutique located downtown in Naples, Florida. The store is small and offers a large collection of beautiful Haitian paintings and other art that you cannot find anywhere else.

The store is named ‘The Lady From Haiti.' Behind its funky name is a story of love.

Melody Bales owns the store. Bales took an interest in the Caribbean early in life, partly because of its art.

"It was the paintings originally that attracted me to Haiti. I had seen one in a studio in a gallery on St. John's Island, one of the American Virgin Islands. And I speak French. I was fascinated by the sound of the language and my parents had gotten me a book when I was a young kid called ‘The Slave Who Freed Haiti.' And it was the story of Toussaint Louverture, the slave that led the revolt against Napoleon.

So I think the fact that that was somehow embedded in my consciousness and the sound of the French language and my love for the Caribbean. So that made me want to go to and live in Haiti." 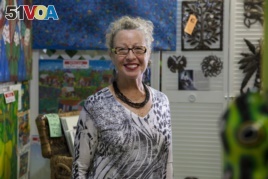 So, that is what she did. In the mid 1980s, Melody Bales moved to Haiti where she taught second grade students.

"I landed there and I was in shock that I couldn't use my French too much because the official language is French, but the people speak Creole. But I adjusted really well to my class. It was a second grade class.

I had wonderful children from diplomats from all over the world because Port au Prince is a capital city and I had the children of American businessmen before the embargo had ruined their businesses and the Haitian elite sent their children to our school. It was an American curriculum and that's what they wanted."

Bales also taught swimming after school and in the summertime. She fell in love with Haiti, especially its people.

"I think the people of Haiti are wonderful. They're very, very sweet. They're humble, they're accepting of their plight, a lot of times. They work very hard if they get a chance.

"They're modest they're kind, they're sharing, all the different things that people that aren't in a big rush to get somewhere fast and achieve and to grab more and more for themselves. A lot of the things that we don't experience so much in our country anymore are still present in Haiti."

Bales says she wishes that Americans knew more about the Caribbean island's rich culture as well.

"I would love people in this country to understand that Haiti has so much more to offer, even though it's not an educated society, for the most part. They have so much more to offer creatively, musically, artistically. The poetry, the literature, they come from a rich background..."

Bales stayed in Haiti for six years, much longer than expected. She says each time she planned to return to the U.S., something held her back. And, then came the chance of a lifetime: a Haitian baby girl in need of a mother.

Soon, Bales was connected with a pregnant woman who could not afford to care for the coming baby. But, there was little time left to act.

"I met this mother, she was going to have the baby within two weeks. So, in that period of time I took her to the doctor, another friend of my doctor friends, and had a sonogram...and I was thrilled to see that it was a healthy developed girl."

Melody Bales says it was a match made in heaven. She named her daughter Rachel. 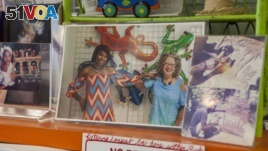 Melody Bales, Lady from Haiti, and her daughter Rachel

"I tell my daughter Rachel I've known her longer than she's known me. I saw her first."

Bales returned to the United States with her daughter Rachel to begin their lives together.

Rachel was the inspiration for "The Lady from Haiti" store. Bales says she wanted her daughter to grow up surrounded by the Haitian native culture with its beautiful colors, creativity and spirit.

"The art in Haiti is one of the strongest features about the Haitian culture. There are basically five schools. Different schools of art in Haiti. The ones that a lot of people think of [are] the market scenes or the peaceable kingdom scene, the jungle animals. And those are very charming.

"And then there's a school of the voodoo art, which is --- it's pretty strong...Voodoo is a pantheistic religion that came from Africa and the Haitian people brought a lot of those beliefs with them."

Another popular Haitian art form found at "The Lady from Haiti" is made from recycled material.

"It's called fer découpé which means cut metal, and it's literally 55 gallon drums that have been cut with a cold chisel and a ball peen hammer."

Bales explains that a design is drawn on the metal before the artist begins to make the cuts.

"And they're fashioned into the most beautiful creations, sometimes they're exotic animals or religious icons or country scenes. But each time I see one, it's just... it's really satisfying because I realize it's hard work, sweat, a wonderful imagination and I love them because they have so much detail."

Bales also loves the papier mache art made in Haiti.

"I think the Papier Mache is cute just because it's so whimsical. It's made from recycled cement bags. They use a heavy- duty craft paper in Haiti, which is so heavy that it actually cracks when you fold it. And they use a ground up root, I believe it's called manioc, as the paste and they make really charming little animals."

Melody Bales is grateful for the wonderful things Haiti has given her, especially daughter Rachel. "The Lady From Haiti" gallery will continue to give back to the island as it shares Haitian art, color and spirit with the rest of the world.

Next time on People in America, meet Henry Reese, Co-founder of City of Asylum Pittsburgh.

funky – – n. adj. stylish or appealing in an unusual way

gallery – n. a room or building in which people look at painting, sculptures, etc.

embedded – v. to place or set something firmly in something else

consciousness - n. the normal state of being awake and able to understand what is happening around you

diplomat – n. a person who represents his or her country's government in a foreign country

elite – n. the people who have the most wealth and status in a society

in vitro – adj. fertilization of an egg outside the mother's body

sonogram – n. a picture that is taken of the inside of a person's body by using a special machine

voodoo – n. a religion that is practiced chiefly in Haiti

pantheism – n. a doctrine that identifies God with the universe

papier mache – n. a material that is made of paper mixed with water, glue, and other substances and that hardens as it dries