Update Required To play the media you will need to either update your browser to a recent version or update your Flash plugin.
By Bryan Lynn
20 October 2021


A government plan in Vietnam calls for the country's use of coal for electricity production to increase by 100 percent by 2030.

The development plan was created by the Ministry of Industry and Trade. It was recently sent to Prime Minister Pham Minh Chinh for approval. 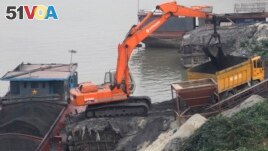 An excavator transfers coal from a ship onto a truck at a coal port in Hanoi, on February 23, 2012. (REUTERS/Kham)

Under the plan, coal-powered plants would produce 31 percent of the country's electricity planned for 2030. The total amount called for would be about 144 gigawatts of power.

Reuters saw a copy of the proposal, called the Power Development Plan. Officials from Vietnam's Ministry of Industry and Trade did not return requests from the news agency seeking comment about the plan.

Vietnam has a population of 98 million people. It is seeking to increase its power production to support the growth of large companies. Several major electronics manufacturers have bases in Vietnam, including South Korea's Samsung and LG.

The plan is based on estimates that Vietnam's gross domestic product (GDP) will increase at a yearly rate of 6.6 percent between now and 2030.

The country will need to invest $116 billion in new power plants and power equipment expansions leading up to 2030, the plan states. By 2045, the investment is estimated to reach $227 billion.

Natural gas, including liquefied natural gas, would make up 22.4 percent of completed capacity by 2030. That compares to 13 percent at the end of 2020.

In addition, non-hydroelectric power will increase to 25.7 percent of the energy mix by 2030. That is about the same amount measured at the end of last year. But the report calls for raising this proportion to up to 41.7 percent by 2045.

Hydroelectric power would decrease in the energy mix to about 20 percent by 2030. That compares to about 30 percent at the end of last year.

"As a developing country that is still facing numerous difficulties, Vietnam is building a harmonious and balanced roadmap for a sustainable energy conversion," Chinh said in a statement.

gigawatt – n. a unit of power equal to one billion watts; a watt is a measure of energy

gross domestic product (GDP) – n. the total value of the goods and services produced by the people of a nation during a year not including the value of income earned in foreign countries

capacity – n. the largest amount or number that can be held or contained

proportion – n. a part of the total number or amount

convert – v. to change the appearance, form or purpose of something