Update Required To play the media you will need to either update your browser to a recent version or update your Flash plugin.
By Dan Friedell
13 November 2021


Businessman Charles Munger recently gave $200 million to the University of California at Santa Barbara, known as UCSB, to help pay for a new student living space. At colleges, students live in buildings called dormitories, or dorms for short.

When complete, the building will be called Munger Hall. The university hopes to open the dorm in late 2025. The school is in Santa Barbara, a small city on the Pacific Coast about 160 kilometers north of Los Angeles.

If the plan continues based on current designs, it will be 11 floors high and provide beds for 4,500 students on a small piece of land. Most of the sleeping areas for students will not have windows. The building only has one large entrance on each side.

The dorm is close to the school's sports fields but far from the rest of the university and the coast. With so many students there, it would be the eighth-most densely populated living area in the world, similar to a part of Dhaka, Bangladesh. 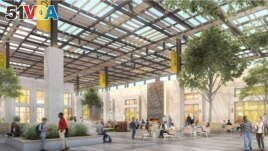 A drawing of some community space at the proposed Munger Hall at the University of California - Santa Barbara.

The building plan became publicly known recently. Many people were surprised by the number of students and the lack of windows, said Matt Poldberg. He has already completed his studies at UCSB.

He said one of the best parts of going to school in Santa Barbara is closeness to the ocean and beautiful areas. Not having windows seemed strange, he said, and being on a piece of land far away from the best parts of the school was strange, too.

"You know, to build such a windowless, joyless-seeming place it seemed like a waste to not have it at least be like 10 steps from the beach like everything else is there."

Munger said the design puts more importance on public spaces. He wants students to spend most of their time away from sleeping areas so they can meet each other and work together. The building will have large cooking, eating and gathering spaces.

The project was not getting much attention until October, when one of its architects dropped out, calling it "disturbing."

Dennis McFadden wrote a letter on October 24, calling the project "destructive to the campus" and the design "unsupportable." He said he was disappointed that the group of administrators and professors studying the project did not object. He said the building was a "radical departure from student housing standards."

News organizations such as The New York Times, CNN and The Guardian all wrote about McFadden's concerns. Some called the project "dormzilla," after the Japanese movie monster Godzilla.

Munger answered the criticism in early November. He talked with Architectural Record about the project. He said the rooms without windows are "quite endurable," and compared them to the rooms on large vacation boats known as cruise ships that do not look onto the water.

He called the building's design safe and able to meet building requirements in California. He said he thinks universities around the United States will build more buildings like Munger Hall.

The UCSB design is similar to a project Munger funded at the University of Michigan. Students have mixed opinions about it.

Why does UCSB need Munger Hall?

UCSB, like much of California, does not have enough low-cost housing. There are more people who want to live in Santa Barbara than the number of homes available. That is a big problem for a university with 25,000 students.

Atmika Iyer writes for The Daily Nexus, a student newspaper at UCSB. She said there is a housing crisis for students. Some students must live far away from campus and drive over an hour to get to school. Others have been known to sleep in their cars. Right now, the university pays hotels so students can live there.

She said one problem is that while the university has been welcoming more students, it has not been building more housing.

While the school sees Munger Hall as an answer, Iyer said most students disagree.

"The general consensus among most of the people I've been speaking with is that this isn't a good idea."

UCSB, however, posted a "question and answer" page online recently, and said "we expect Munger Hall...to be highly desirable."

Nolan Gray is a researcher at the University of California, Los Angeles. He studies urban planning. He recently wrote about Munger Hall for Bloomberg news service. He said that the "mega-dorm" with a cost of over $1 billion, may be UCSB's only way out of an "extreme" housing problem.

Gray called Munger Hall "a trade-off," where students get to go to school in a beautiful place in exchange for sleeping in a small, windowless room.

"Living in a dorm is not unlike living in a small apartment in a really nice city, right? When you live in a city, the park is your lawn, the restaurants are your dining room, the bars are your parlors, the library is your office."

Gray said he thought Munger Hall has a 65 or 70 percent chance of being built at UCSB in the coming years.

"They're probably going to do everything they can to make something like this work," he added.

Iyer said the responsibility for the problem rests not only with the university, but with the state government and the communities close to the university. All three have not done a good job of meeting growing demand for higher education and housing. In addition, Iyer said, there are no other current plans for student housing.

"UCSB is sort of putting all their eggs in this one basket, right? Munger Hall is the only proposed solution thus far."

If Munger's project goes ahead, it will only solve the housing problem for a short time. The school said it is only a "partial fulfillment of our responsibility to our students."

Poldberg, the UCSB graduate, said he thinks students would still rather go to Santa Barbara than to other California schools.

"I would probably pick the windowless dorm," he said.

What would you do if you lived in a room with no windows? Tell us in the Comments Section and visit 51VOA.COM.

disturbing – adj. causing people to be upset or worried

radical – adj. very new and different from what is traditional or ordinary

standard –n. a level of quality or accomplishment that is considered acceptable or desirable

endure – v. to deal with or accept

consensus – n. a general agreement about something; an idea or opinion that is shared by all the people in a group

apartment – n. a (usually) rented room or set of rooms that is part of a building and is used as a place to live

lawn – n. an area of ground (such as the ground around a house or in a garden or park) that is covered with short grass

parlor – n. a room in a house or apartment that is used for spending time with guests