Sasha Obama Has a Summer Job

Update Required To play the media you will need to either update your browser to a recent version or update your Flash plugin.
By Dan Friedell
05 August, 2016

No summer beach vacation in the northeast U.S. state of Massachusetts is complete without an order of fried clams at a seaside restaurant.

People enjoy eating the shellfish, which are dipped in a mixture made from flour, water and spices and then cooked in hot oil.

U.S. President Barack Obama and his family like to visit Martha's Vineyard in the summer. The Obama family often eats at Nancy's during their vacations.

It seems that one Obama has even started working at Nancy's this summer. The Boston Herald newspaper first reported that Sasha Obama, the president’s younger daughter, has a job there. She is 15 years old. 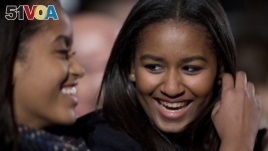 Sasha Obama, right, is working at a seafood restaurant this summer.

The story says Sasha Obama is helping the restaurant get ready for its lunch service each day. She is also bringing customers their food orders at a take-out window.

She works for about four hours. Her last day is Saturday, when the rest of the Obama family arrives for vacation.

One of the other workers at the restaurant said Sasha started working earlier in the week. She has been using her full name, Natasha, while on the job.

But, a third person tweeted that someone else who really needs the money should have the job. He said Sasha Obama was only working because people would like the story.

The president's daughter does have a security team looking out for her. But they have been waiting in a large car nearby while she works.

What was your most memorable summer job? We want to hear from you. Write to us in the Comments Section or on 51voa.com.

restaurant – n. a place where you can buy and eat a meal

clam – n. a type of shellfish that lives in sand or mud, has a light-colored shell with two parts, and is eaten both cooked and raw