Update Required To play the media you will need to either update your browser to a recent version or update your Flash plugin.
By Dan Novak
29 November 2022


School systems across the United States have struggled to find workers to deal with students' mental health needs. Mental health problems among students have worsened since the COVID-19 pandemic began.

Chalkbeat found that among 18 of the country's largest school districts, 12 started the school year this autumn with fewer counselors or psychologists than they had in the fall of 2019.

As a result, many school mental health professionals must work with a high number of cases that go beyond recommended limits, experts say. Many students are having to wait for urgently needed help. 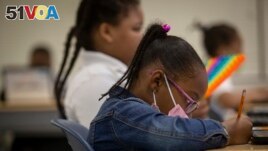 Some of the extra need for support has been taken by social workers. The number of social workers has grown by nearly 50 percent since before the pandemic, national data shows. But social workers have different training from other mental health professionals and have other responsibilities, too.

The Chalkbeat data is based on school staffing data received through open records requests. The 31 largest districts in the U.S. were questioned, but some did not measure or provide data.

School systems around the U.S. received money from the federal government to deal with effects of the COVID-19 pandemic. Some districts used the money to add mental health workers. But others did not. They worried about paying them once the aid money ends. Districts have limited time to spend the nearly $190 billion of recovery money.

Many schools that have wanted to hire more mental health workers simply cannot find them. School psychologist positions have been especially hard to fill. With their training, school psychologists provide one-on-one counseling and help students who are at risk of suicide.

In Maryland, there is a large shortage of psychologists at Montgomery County Public Schools. The district has kept the psychology department centered on crisis prevention and providing legally required services like special education assessments, said Christina Connolly-Chester. She is the district's director of psychological services. That has meant they cannot keep up with other, less urgent counseling services.

The district sought to hire workers to help with students who have anxiety or depression or struggle with conflict. But there are still 30 open psychologist positions, a district official said this month.

Even before the pandemic, some schools struggled to find psychologists. New psychologists have not been entering the field quickly enough.

In the Chalkbeat analysis, half of the 18 large districts budgeted for fewer counselor or psychologist positions this school year than they did in the fall of 2019.

"For all the talk about mental health, the actual money they're spending on it is not that high," said Phyllis Jordan. She is with FutureEd at Georgetown University in Washington D.C. The group measures school spending. School districts only planned to spend about 2 percent of the largest round of federal COVID aid on mental health hiring, the group found.

There has been an increase, however, in social workers.

In Houston, Texas, hiring increases meant nearly every school started this fall with a counselor or social worker.

Newly hired social worker Natalie Rincon is able to meet one-on-one with students who are in crisis and teach other students ways to ease anxiety.

Still, the workers are not able to meet all the need at Rincon's school. She often has to the help the students with urgent issues, leaving less time to check in on others.

"I want to be able to meet with a kindergartner just to talk about how they're feeling," Rincon said. "Those are the kinds of things that I think slip through the cracks."

assessment — n. the act of making a judgment about something

slip through the cracks — idiom be overlooked or ignored