In America, Some School Boards Have Student Members

Update Required To play the media you will need to either update your browser to a recent version or update your Flash plugin.
By VOA
22 November 2022


School boards are usually made up of elected members who make policy decisions about local public school districts.

In the United States, some school boards have representatives who are students.

There are issues that have made some school board meetings places of disagreement. These issues include measures to prevent the spread of COVID-19, how the issues of race and sexuality are taught, and the place of religion in the classroom. 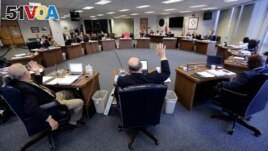 Until recently, most school boards were thought of as non-partisan. But some school boards have been affected by political disagreements. Some candidates for local, state and national office in November's elections considered school policy an important campaign issue.

Conservative groups like Moms For Liberty and The 1776 Project spent millions of dollars helping elect conservative school board members. Liberal organizations also support candidates and causes. They include Stand for Children, the Campaign for Our Shared Action Fund, and Education Reform Now. Teachers' labor unions like the American Federation of Teachers and the National Education Association, also spend money in support of political candidates and causes.

Debates about school policy can involve local and state school officials, school board members and parents. However, some districts permit student members on school boards. They provide the board with a student opinion on the board's decision-making.

VOA spoke with five student board members from Maryland, Wisconsin, and Virginia. Each said they felt it was very important for school boards to have a student voice.

Zachary Nowacek is a student board member at the Wauwatosa School District outside Milwaukee, Wisconsin. He said school board members "don't always get to see the whole school experience from a student perspective. And because we are the ones receiving the education, it's important for us to be a part of the conversation as well."

Janare Davis, who recently finished his term as student representative for Portsmouth city schools in Virginia, agrees. "That was my big thing [as a student representative]. Students having a voice." As a member, he visited each of the district's schools to hear students' concerns. Even before he became a board member, he supported legislation that removed school uniforms for the only school in Portsmouth that required them.

"In my opinion, an adult can't speak for a student. Students can speak for students," Davis said.

Some of the student members say that they have witnessed some of the debates about school policy during their time on a board.

Noa Blanken is the student representative in Harford County schools in northern Maryland. The county favored Donald Trump over Joe Biden in the 2020 presidential election by 55 percent to 43 percent. She described the county as the "perfect mix of every single demographic you can imagine."

Blanken said that many adults from outside the district have come to speak to the board during meetings. She said many have spoken out against critical race theory, an idea that makes race a central consideration. During public comments in meetings "groups come and they get pretty loud and rowdy," she said.

Blanken said some people who have spoken to the board support reducing funding for programs for poor students, like free school lunches. Blanken said she wanted to be a board member to support low-income students, who make up a large percentage of students in Harford County.

"These people are coming in and they there are arguing that we need to focus all of our money on science and math and reading and history [to improve test scores] and take away all these other resources that these students so desperately need. And it's really upsetting to see."

Nowacek said his district in Wauwatosa County recently passed a new teaching plan, which introduces students to sexual and gender ideas. On Nowacek's first day on the board, he said a man told the board to "‘go home and look in the mirror and consider whether they believe themselves to be moral people.'"

Blanken said another issue that came before the board this fall concerned the county's mixed-gender locker rooms. A Maryland state senator wrote a letter to the school board opposing the policy.

"I am appalled...that boys can be in girls bathrooms and locker rooms and vice versa," said a woman during the board's public comments section of a board meeting.

However, each of the student members said the board members they serve with cooperate and work well together.

"We have a lot of different people with different views and opinions, but every single person that sits on the board is there for the wellbeing of students," Blanken said.

Zach McGrath said he believes student members have a "moderating effect on the discourse between the board members, because you don't want to get into a fit when it's in front of a student. You want to set a good example."

McGrath sits on Anne Arundel County Maryland's school board. He said he has not seen divisive debates play out during his time on the board.

Each student representative also said other board members value their opinion and care about what they have to say.

McGrath said that especially as a voting member in Maryland, "I am very much treated as if I was an adult in the boardroom. It just so happens to be that I'm representing students."

Emmett Joselyn represents students in the Shorewood School District in Wisconsin. He said having student board members is good for both students and the school board.

He said: "I feel like a lot of the time students—they're not aware of what's going on at the district level. And I hope I can connect the students and the school board and sort of make both parties a little bit more familiar with each other."

district — n. an area set up by a government for a special purpose

non-partisan — adj. not linked with a political party, aimed at not taking a political side

perspective — n. a person's way of thinking about and understanding something

uniform — n. special clothes that are worn by all members of a group to show that they are together

demographic — n. a quality, such as age, sex or race, that are present in a group of people

desperately — adv. to do something in a way that is sad or upset and shows little hope

gender — n. the state of having two sexes

view –n. a person's way of thinking about something, an opinion

discourse — n. the exchange of thoughts and ideas