Update Required To play the media you will need to either update your browser to a recent version or update your Flash plugin.
By Hai Do
24 October 2022


Students across the United States have had "historic" drops in math and reading test scores since the start of the pandemic.

Across the country, math scores saw their largest decreases ever. Reading scores dropped to 1992 levels. Nearly four in 10 eighth graders failed to understand basic math ideas. Not a single state saw any improvement.

Those are the findings from the National Assessment of Educational Progress (NAEP) — also known as the "nation's report card." 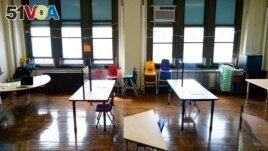 FILE - Desks are spaced apart ahead of planned in-person learning at an elementary school on March 19, 2021, in Philadelphia. Students across the United States have had "historic" drops in math and reading test scores since the start of the pandemic. (AP

Hundreds of thousands of fourth and eighth graders across the U.S. took the test earlier this year. It was the first time the test had been administered since 2019. The result is seen as the first nationally representative study of the pandemic's effect on learning.

"It is a serious wakeup call for us all," Peggy Carr, an official with the National Center for Education Statistics of the Education Department said. "In NAEP, when we experience a 1- or 2-point decline, we're talking about it as a significant impact on a student's achievement. In math, we experienced an 8-point decline — historic for this assessment," she said.

Researchers usually consider a 10-point gain or drop as comparable to about one school year of learning. Education Secretary Miguel Cardona said it is a sign that schools need to work much harder to help students recover.

"Let me be very clear: these results are not acceptable," Cardona said.

Declines across all groups

The NAEP test is usually given every two years. It was taken between January and March by students in every state and the nation's largest school systems. Test scores did not show any progress even before the pandemic. But the latest scores show decreases at levels not seen before.

In both math and reading, students scored lower than those tested in 2019. But while reading scores decreased, math scores sharply dropped by the largest amount in the history of the NAEP, which began in 1969.

"This is more confirmation that the pandemic hit us really hard," said Eric Gordon, head of the Cleveland school system. To help students recover, the school system has added summer school and after-school tutoring.

Educators are concerned, however, about the widening divide among different groups of students. Black and Hispanic students saw bigger decreases than white students in fourth grade. And scores fell most sharply among the lowest-performing students as compared to the others.

Alberto Carvalho is head of the Los Angeles, California school system and serves on the National Assessment Governing Board. The board decides policy for the NAEP. Carvalho said the recent test results show that schools must deal with the "long-standing and systemic shortcomings of our education system."

"While the pandemic was a blow to schools and communities, we cannot use it as an excuse," he said. "We have to stay committed to high standards and expectations and help every child succeed."

Collin Binkley reported this story for The Associated Press. Hai Do adapted the story for Learning English.

decline - n. a change to a lower number or amount

achievement - n. something that has been reached through hard work

tutor - v. to teach a single student, to teach someone as a tutor

committed - adj. willing to give time, energy to something