Update Required To play the media you will need to either update your browser to a recent version or update your Flash plugin.
By Bryan Lynn
02 November 2021


The son of a famous street food seller in Bangkok, Thailand, has taken over the stand of his father, who died of COVID-19.

Every morning, Adulwitch Tangsupmanee places a picture of his father, Chanchai, at the front of the food stand, or stall. It is in the Chinatown area of Bangkok under an old movie theater.

His father was famous for preparing a kind of rolled rice noodles called "Guay Jub." His food was even recognized in recent years by the highly respected Michelin Guide to worldwide restaurants. 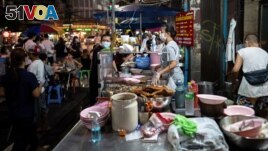 Jirintat, and Adulwitch Tangsupmanee, 42, son and daughter of Chanchai Tangsupmanee, who died at age 73 of the coronavirus disease in July, works at their late father's food stall in Bangkok's Chinatown, Thailand, October 6, 2021. (REUTERS)

"I prepared the broth for my father when he was here, and I still do it when he's gone," the 42-year-old Adulwitch told Reuters. "I feel he's still around."

His father had been operating the food stall for nearly 50 years until he died of COVID-19 in July. He was 73 years old. "The shop is what my father loved the most and I love him most," Adulwitch said. "I have to keep it going no matter what."

He added: "We never saw this disease coming into the world...and we never thought it would take so many lives or that it would happen to our family."

Chanchai was one of at least seven well-known food sellers in Bangkok to die of COVID-19 in recent months, Reuters reports.

Now, other family members have taken the responsibility to keep serving the same tasty, high-quality offerings the street chefs created.

Even before the pandemic, many street food sellers in Bangkok were feeling financial pressures. They had faced removal orders and bans in recent years as part of city efforts to clean up the streets. As this happened, many nicer, traditional restaurants opened up across the city.

But Adulwitch still has many loyal customers. One of them recently told Reuters that many people seek out the famous stall. "When they come over to Chinatown, they know that they have to come and eat rolled rice noodle under the old cinema building. It's made the Chinatown street famous."

While Chanchai's children were immediately ready to take over his stall when he passed, the children of Ladda Saetang were not so sure. At first, they debated whether to continue the family's duck stand after their mother died in May.

Ladda was a 66-year-old cook with a kind smile. She was known as "Grandma Si." She ran a stall just 650 meters away from Chanchai's. After thinking it over, her daughter Sarisa decided to keep the business open and learn everything she could about preparing duck. She thought it would be a good way to honor her mother's memory.

"I don't want the recipe to disappear. This was her whole life," Sarisa said. "I'll be overjoyed if customers say our ducks still taste like my mother's." She added: "Some tell me to not quit, because they can't find food like this anywhere else."

broth – n. a soup that is often made with meat

chef – n. someone who cooks food in a restaurant

recipe – n. a list of foods and a set of instructions that tell you how to cook something