Update Required To play the media you will need to either update your browser to a recent version or update your Flash plugin.
By Jonathan Evans
30 October 2021


Lake Tuz, Turkey's second-largest lake and home to several kinds of birds, has entirely dried up this year.

Water has also gone down at several other lakes across Turkey. Experts say the lakes are victims of drought brought on by climate change and harmful agricultural policies. They warn that the entire area around the Mediterranean Sea is especially at risk.

Levent Kurnaz is a scientist at Bogazici University's Center for Climate Change and Policy Studies. He told the Associated Press, "(We have) rising temperatures and decreasing rain, and on the other side, the water needs for irrigation in agriculture. It's a bad situation all over Turkey at the moment." 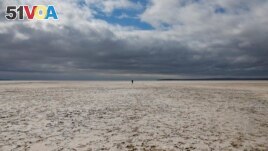 For hundreds of years, Lake Tuz has been home to huge groups of flamingos that travel and reproduce there when the weather is warm. But this summer, thousands of dead flamingos were found spread out across the dried-up lakebed.

"There were about 5,000 young flamingos. They all perished because there was no water," said Fahri Tunc. He is the wildlife photographer who took pictures of the dead birds. He also heads the local office of a Turkish environmental group. Tunc said, "I hope I do not come across such a scene again."

Turkey's state-run Anadolu Agency reported that a study conducted by Ege University shows that water levels at Lake Tuz began to drop in 2000. The study noted that the lake dried up this year because of rising temperatures, increased evaporation and a lack of rain. The study also noted a sharp decrease in underground water levels around Lake Tuz.

Farms in the area have started growing profitable but water-intensive crops such as corn, sugarbeets and alfalfa. These crops have used up groundwater supplies, Tunc said. He added that farmers have dug thousands of unapproved wells, while streams supplying water to the lake have dried up.

Tunc is a native of Aksaray, a city to the south of Lake Tuz. He is saddened by the thought that he will not be able to enjoy the flamingos with his 7-month-old son as he did with his 21-year-old son. He remains hopeful, however, that Lake Tuz may replenish itself if the government stops the water-intensive agriculture.

But climate scientist Kurnaz is less hopeful. He said, "They keep telling people that they shouldn't use groundwater for this agriculture and people are not listening."

Kurnaz noted, "If you don't pay them enough money, the farmers, they will plant whatever is water-intensive and will make money for them."

Susan Fraser and Mehmet Guzel reported on this story for the Associated Press. Jonathan Evans adapted this story for Learning English. Hai Do was the editor.

irrigation – n. an act or process of supplying with water or cleaning with a flow of liquid

replenish – v. to fill or build something up again