Update Required To play the media you will need to either update your browser to a recent version or update your Flash plugin.
By Dan Friedell
25 October 2021


Sudan's military arrested the prime minister and took control of the government on Monday. And thousands of people came out to protest the takeover that threatens the country's move toward democracy.

The head of the military, General Abdel-Fattah Burhan, said that he was dismissing the transitional government and declaring a state of emergency.

Burhan said fights between political leaders required the move and military leaders would keep the North African country safe and secure. He said the armed forces would turn the country over to "a civilian, elected government." Burhan said the election is scheduled for July 2023.

Abdalla Hamdok, a one-time economist and diplomat at the United Nations, became prime minister of the North African country in August 2019. He led the transitional government that was established after protesters forced long-time dictator Omar al-Bashir to leave office two years ago. 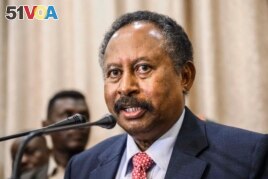 Sudan's Information Ministry said Hamdok was detained by the military after refusing to issue a statement in support of the takeover. The ministry, which was still under the control of Hamdok's supporters, called Burhan's announcement a military coup and urged resistance.

The Associated Press reported that thousands of people took to the streets to protest the military action in the capital of Khartoum. Protesters could be heard saying, "the people are stronger, stronger" and "retreat is not an option!"

In Omdurman, protesters blocked the streets in support of civilian rule. Iman Ahmed, a 21-year-old protester, told Reuters: "We will defend democracy until the end." Another young man who gave his name as Saleh said, "Burhan cannot deceive us. This is a military coup."

The AP said, based on information from the hospitals, about 20 people were wounded in clashes between protesters and security forces.

Reactions from around the world

Karine Jean-Pierre, a spokesperson for President Joe Biden said the United States was "deeply alarmed at reports of a military takeover." She said the U.S. called for the immediate release of the prime minister and other officials.

The African Union, the Arab League, the European Union and the United Nations all said Sudan's political leaders should be released and human rights respected. U.N. Secretary-General Antonio Guterres added on Twitter: "The UN will continue to stand with the people of Sudan."

Sudan has suffered other coups since it gained its independence from Britain and Egypt in 1956.

Al-Bashir came to power in 1989 in one such takeover, which removed the country's last elected government. Last month, Bashir supporters tried to remove the transitional government led by Hamdok.

In recent weeks, a coalition of tribal groups and political parties allied with the military urged the removal of the civilian government.

Dan Friedell adapted this story for Learning English based on reports by VOA, Reuters and The Associated Press. Hai Do was the editor.

What do you think will happen in Sudan? Tell us in the Comments Section and visit 51VOA.COM.

transitional – adj. lasting a short time during the move from one state to another

coup – n. a sudden attempt by a small group of people to take over the government usually through violence

retreat – v. to move back to get away from danger, attack, etc.

option – n. something that can be chosen : a choice or possibility

deceive – v. to make (someone) believe something that is not true

alarmed – adj. concerned or feeling a sense of worry or danger