Update Required To play the media you will need to either update your browser to a recent version or update your Flash plugin.
By Andrew Smith
17 November 2022


The latest products chosen to enter America's National Toy Hall of Fame include a toy dating to ancient times, an art set that uses lights and a series of action figures.

The hall recently announced this year's choices: the top, Masters of the Universe and Lite-Brite. The three were chosen from a group of 12 finalists that also included bingo, Nerf, the pi&#241;ata, Pound Puppies and Spirograph.

The Toy Hall of Fame accepts a new class of toys each year in a ceremony at The Strong National Museum of Play in Rochester, New York. 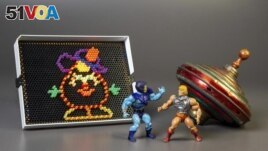 The three toys inducted into the National Toy Hall of Fame on Nov. 10, 2022 (Courtesy of The Strong Museum via AP)

The top has long been a common childhood toy in cultures in Asia, Europe, the Americas and Australia. The Hall of Fame noted that ancient Greek art shows people playing with the spinning objects more than 2,000 years ago.

The hall recognizes toys that have inspired creativity and remained popular over time.

Christopher Bensch is vice president for collections at the Museum of Play. He said in a news release, "With more than 5,000 years of history behind it, it's about time that the top spun its way into the National Toy Hall of Fame!"

The Lite-Brite art set was introduced by the Hasbro toy company in 1966 and has remained popular. Marketed in 1968 as a "magic light box," the toy permits children to create glowing pictures by pushing colorful play pieces into a black background.

Michelle Parnett-Dwyer is a collector at the Museum of Play. She said Mattel understood that kids "spend lots of time in fantasy play" and like the chance to imagine themselves as a hero. "Masters of the Universe characters had the strength, weapons, and power to defeat the villain—and give kids confidence."

The three new members of the Hall of Fame join past choices that included everyday objects like the stick and cardboard box, the board game Risk, as well as technology entries such as Nintendo's Game Boy.

Anyone can nominate a toy. A panel of experts chooses the winners.

inspire – v. to give or create motivation and encouragement to do something

glow – v. to give off light

villain – n. a bad or evil person, usually one who commits crimes