US Gas Prices Fall to Lowest Prices Since 2004

Update Required To play the media you will need to either update your browser to a recent version or update your Flash plugin.
By VOA
01 December, 2015


Gasoline prices in the United States are nearing their lowest since 2004.

The average price in the U.S. was $2.06 per gallon for unleaded regular, according to the American Automobile Association (AAA). 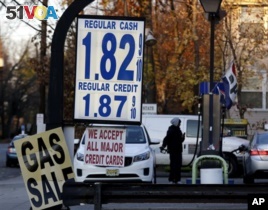 Gas prices are displayed at a service station in Leonia, N.J., Tuesday, Nov. 24, 2015. With Thanksgiving gas prices falling, the number of travelers is expected to rise, with one traffic-tracking firm predicting delays could be noticeably longer than last year. (AP Photo/Seth Wenig)

That is about 54 cents per liter.

The average price dropped another penny over the Thanksgiving holiday to 53 cents per liter. That is according to GasBuddy.com, a service that reports on U.S. gas prices.

That would be 21 cents per liter less than a year ago, and 34 cents cheaper per liter than in 2013, GasBuddy says.

Because nearly 90 percent of Americans will travel by car over the winter holidays, the savings will add up.

The lowest prices were in Indiana, South Carolina, Alabama, Missouri, Texas and Mississippi, AAA said. All five states have average prices of 49 cents per liter or less.

The lower prices are a result of oversupply, according to GasBuddy.

Prices vary in the United States based on state taxes and the local supply of gasoline from nearby refineries.

Worldwide, the lowest average gasoline prices were in Venezuela, just 1.6 cents per liter, according to GlobalPetrolPrices.com.

Libya, Saudi Arabia, Algeria and Kuwait offered gas at less than 26 cents per liter ($1 a gallon), the website reported.

The prices differ based on available supplies, taxes imposed by governments and the amount of subsidies. Venezuela not only produces oil, but heavily subsidizes gasoline to keep prices near zero.

We want to hear from you. Write to us in the Comments section or discuss how much you are paying for gasoline near your home on our 51VOA.COM.

liter – n. a metric unit for the volume of a liquid or gas; there are 3.79 liters in a gallon

destination – n. a place where someone is going or something is being sent

assumes – v. to think or believe something is true without proven facts

benficary – n. a person, organization, etc., that is helped by something

oversupply – n. an amount of something that is more than is needed or wanted

projection – n. an estimate of what might happen in the future based on what is happening now

subsidies -- n. money that is paid usually by a government to keep the price of a product or service low or to help a business or organization to continue to function

deter – v. to cause (someone) to decide not to do something

decline – n. to become lower in amount or less in number