Update Required To play the media you will need to either update your browser to a recent version or update your Flash plugin.
By Alice Bryant
27 January, 2017


The International Monetary Fund (IMF) says people in Venezuela are likely to experience economic hardship in 2017.

Venezuelans are already experiencing severe shortages of food and other goods because of the country's economic crisis.

Venezuela is "on a path to hyperinflation," wrote Alejandro Werner, the IMF's director for the Western Hemisphere. He expects inflation levels to keep rising, while economic activity shrinks.

Werner made the comments in the organization's latest predictions on Latin America and the Caribbean.

Venezuela's problems are partly to blame on a large and growing budget deficit, economic distortions, and a severe restriction on the availability of imports of some goods, he wrote. His comments appeared Monday on an IMF website. 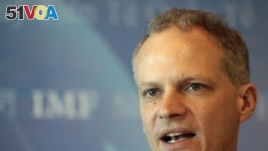 Alejandro Werner, Director of the Western Hemisphere Department of the International Monetary Fund, speaks during an IMF news conference in Montevideo, Uruguay, May 6, 2013.

This week, President Nicolás Maduro appointed economist Ricardo Sanguino to lead the country's Central Bank. Sanguino is a political ally of Maduro and a member of the ruling United Socialist Party.

He replaces Nelson Merentes, who resigned last Friday. Merentes had the support of investors until he supervised an expansion of the money supply that helped fuel inflation to a reported 800% last year. That information comes from Reuters news agency.

Economist Jesus Casique told VOA it is hard to measure the exact rate of inflation or economic shrinkage because the central bank does not publicize the numbers. He suggested that, by keeping such information secret, "the Central Bank of Venezuela has been repeatedly violating the constitution of the republic."

Venezuela's extensive oil supply made it the richest Latin American nation in the 1970s. But with the 2014 collapse of oil prices, costs for goods and services have risen, along with crime. Last month, the Associated Press (AP) found evidence that Venezuela's military was profiting by seizing and reselling rice and other foods at high prices. Maduro had given the military the responsibility of food distribution.

Several members of the United States Congress are calling for U.S. sanctions against those who sell food illegally, including Venezuelan officials, the AP reported.

Opponents of Maduro's administration demonstrated in Caracas on Monday. The demonstrators were demanding local elections and a nationwide vote on Maduro's leadership. His supporters also organized marches.

The protest was held on the anniversary of Venezuelan dictator Marcos Perez Jimenez' removal and a return to democracy in 1958.

Alvaro Algarra wrote this report for VOAnews.com, with additional reporting from Carol Guensburg. Alice Bryant adapted the story for Learning English. George Grow was the editor.

distribution - n. the act of giving or providing something to people

sanctions - n. an action that is designed to force a country to obey international laws by limiting or stopping trade with that country and/or by not permitting economic aid for that country

hyperinflation - n. inflation growing at a high rate in a short time

distortion - n. the act of changing the shape of something